September is granting us a beautiful Indian summer. While the afternoons are mild and sunny, the mornings start with that new chill in the air that announces the change of the season. I love the approach of autumn and the prospect of cosy cooking and baking. But before I’ll happily transition to everything pumpkin and spice, I’m making the most of the bold and fresh flavours of late summer’s produce so widely available at the moment. Sweetcorn, summer tomatoes and fennel are at their best right now. And combined they make a wonderful topping for our current weekday staple: this buckwheat pizza with homemade red pesto and late summer veg. 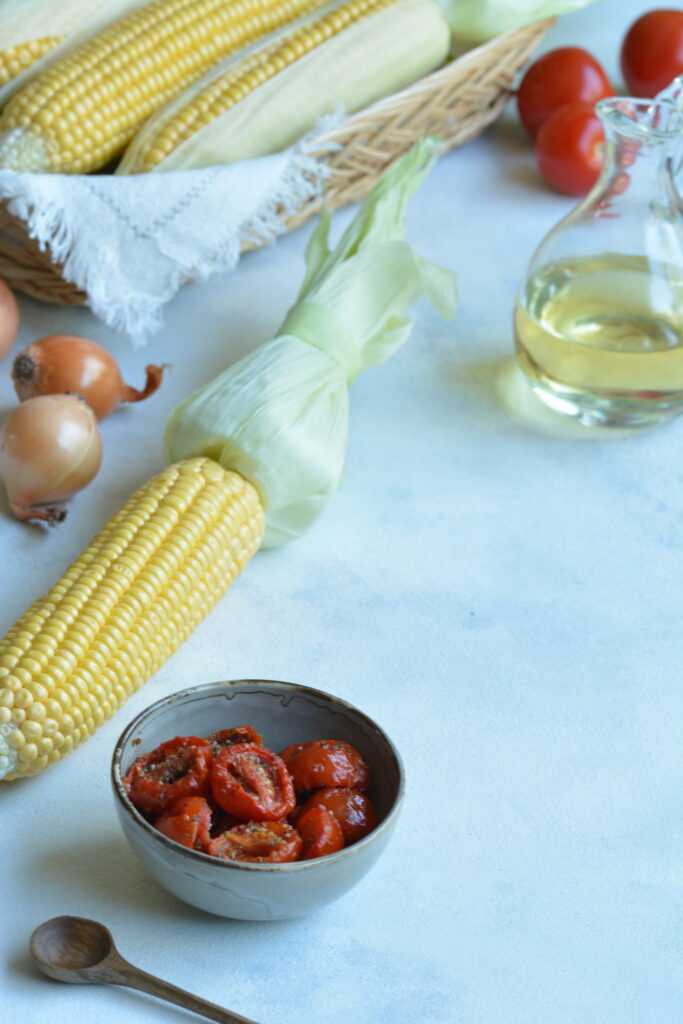 This buckwheat pizza combines a crisp base with a rich, full-flavoured topping. A fair warning: the base is quite different from the regular white yeasted version you might expect. It’s a more rustic, quick mix of buckwheat flour, chickpea flour, oil and water, brought together and rolled out directly on the baking tray. The mixture of flours makes this pizza gluten free, but it also gives the base a wonderful dark flavour and just about triples its nutritional value. When baked along with the toppings, it turns out crunchy, biscuit-like and delicious. 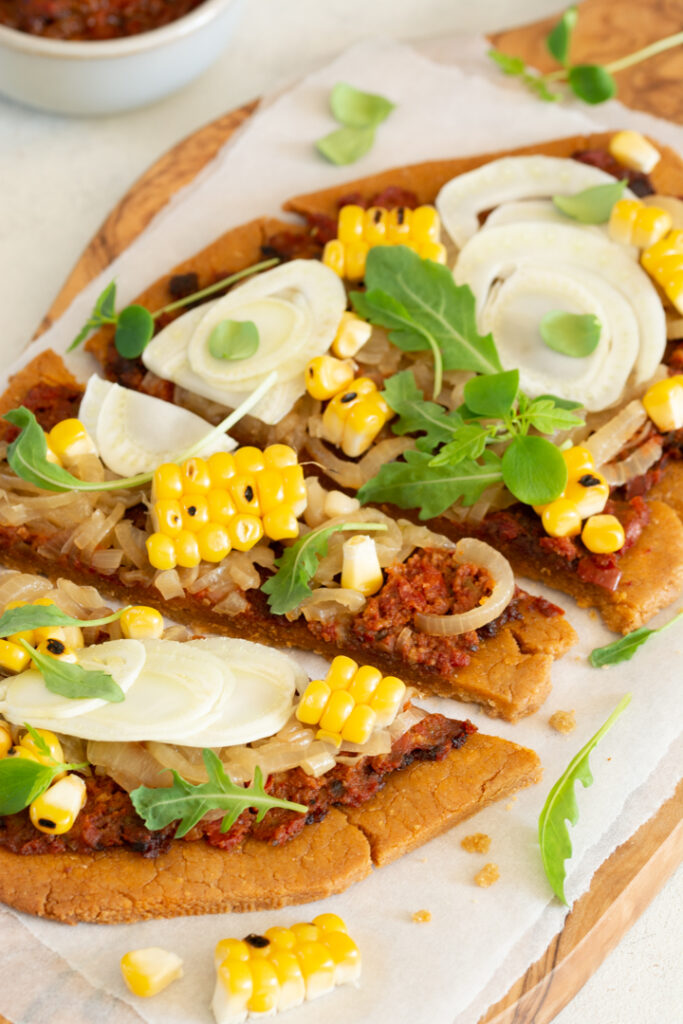 The toppings are a mixture of crisp and sweet veggies that can be added with minimum preparation, and more full-bodied ingredients, which add substance and deep umami flavour. The latter, comprising caramelised onions and oven-dried tomato pesto, are best prepared ahead, because they develop their rich flavour when cooked slowly over a longer period of time. This requires a bit of planning, but I can promise you it’s more than worth the effort and the hands-on cooking itself is actually minimal. Then, when you have all your toppings at hand, all that’s left to do is pile them onto your base, bake for half an hour and enjoy the variety of flavours and textures. 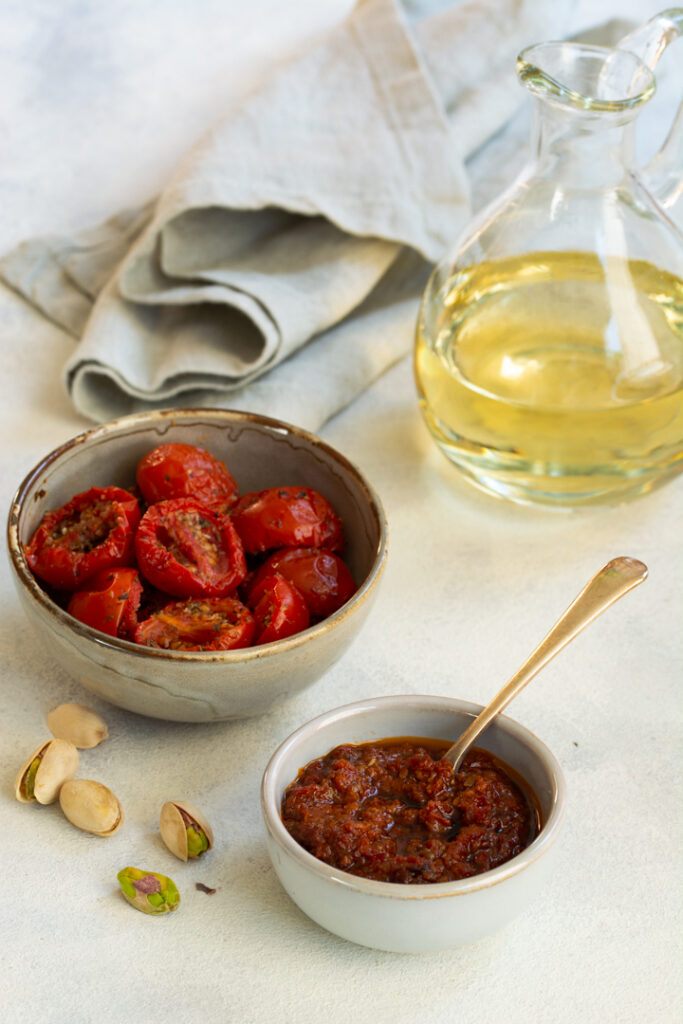 The red pesto used to cover the pizza base is a simple blend of oven-dried tomatoes, garlic and salted pistachios, mixed with a little oil to get a spreadable consistency. You can make the oven-dried tomatoes at home starting with fresh cherry tomatoes, or use semi-dried tomatoes from a jar instead. And if you’re really hungry and in a hurry, a shop-bought vegan red pesto works deliciously as well (I love the red pestos from Puro Vegan and the Sacla Free From range, to name a few).

The pesto layer in its turn is topped with thinly shaved raw fennel, a generous dose of the caramelised onion and a pile of juicy sweetcorn. The corn is griddled on the cob before cutting off the kernels, which adds a pleasant caramel tone and a slightly charred flavour to its natural sweetness. If you prefer, though, you can parboil the corn cobs instead until the kernels are juicy and tender.

Now simply bake and enjoy! Topped after baking with arugula and nutty Tahoon cress, this pizza leaves the four of us feeling fancy and satisfied. Depending on your taste and the progression of the season, you can vary your choice of toppings, taking it into autumn with a combination of fried mushrooms, baked pumpkin wedges and griddled asparagus. 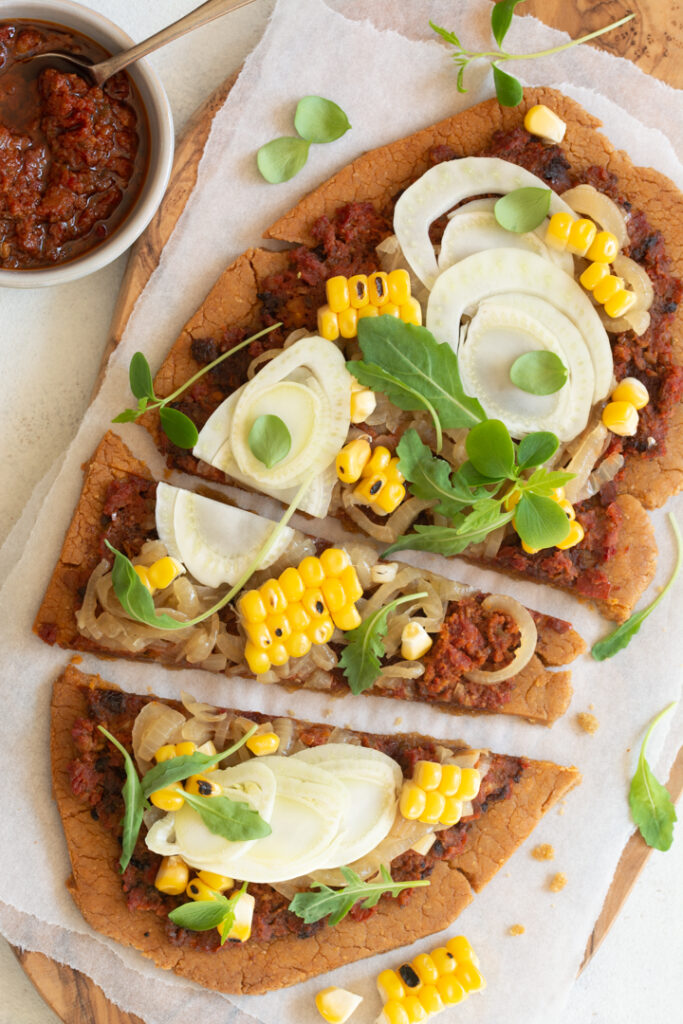 for the red pesto *)

*) Shop-bought vegan red pesto makes a quick alternative to this homemade verion. I personally love the red pestos from Puro Vegan and the Sacla Free From range. 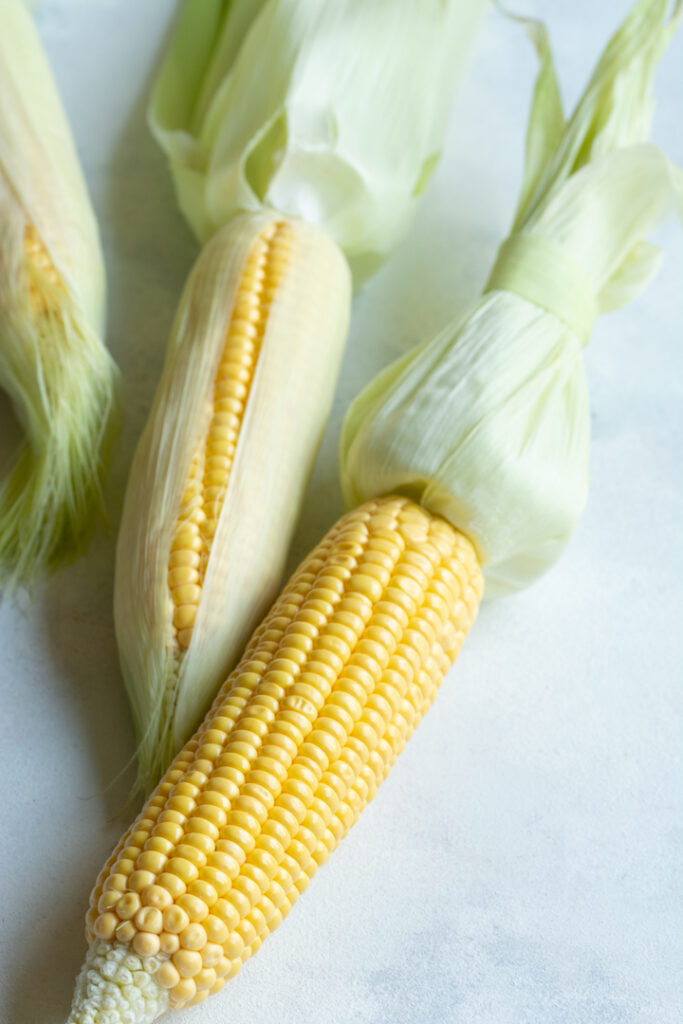 Start with caramelising the onions, if you don’t have a batch ready yet.

To make the red pesto, put the oven-dried tomatoes, garlic and pistachios in the small bowl of a food processor. Add a little olive oil, then blend the mixture to a course sauce. Now add small amounts of olive oil until the sauce has a nice and spreadable consistency. Set aside.

Heat a griddle pan until piping hot. Place the corn cobs in the pan without adding oil. Using tongs, turn the cobs until de kernels are puffed, bright yellow and lightly charred all around. Take the corn cobs from the pan and leave to cool.Then cut the kernels off the cob with a sharp knife.

Mix the buckwheat flour, chickpea flour and salt in a large mixing bowl. Add the olive oil and water. Using your fingers, stir the liquids into the flour mixture, then knead to make a firm ball of dough that’s moist, but not sticky. Add a little extra flour if the dough is too wet, or a splash of water if it’s too crumbly and keeps falling apart. On a sheet of paper, roll the dough to an oval-shaped thin pizza base. The dough is firmer than regular pizza dough and it may break at the edges when you roll it out. If so, though, the pieces can easily be stuck together again, so don’t be discouraged. Transfer the baking paper with the rolled-out dough to a baking tray. 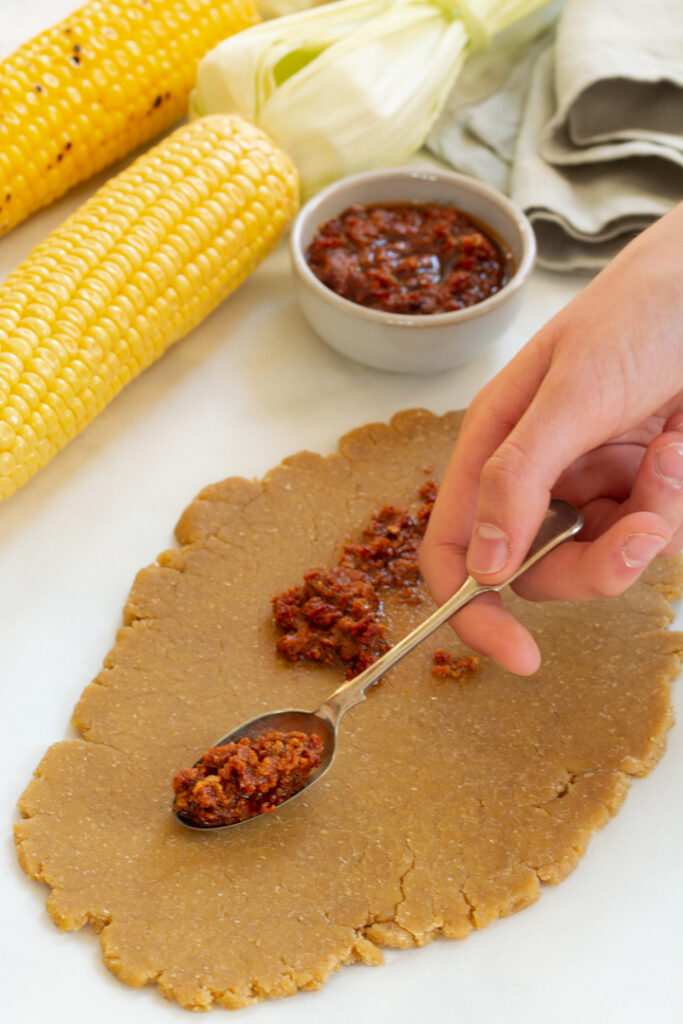 Spread the dough with the red pesto. Top with the caramelised onion, the sweetcorn and the shaved fennel.

Bake the pizza for about 20 minutes, until the base is crisp and golden at the edges.

Serve topped with the arugula and cress. 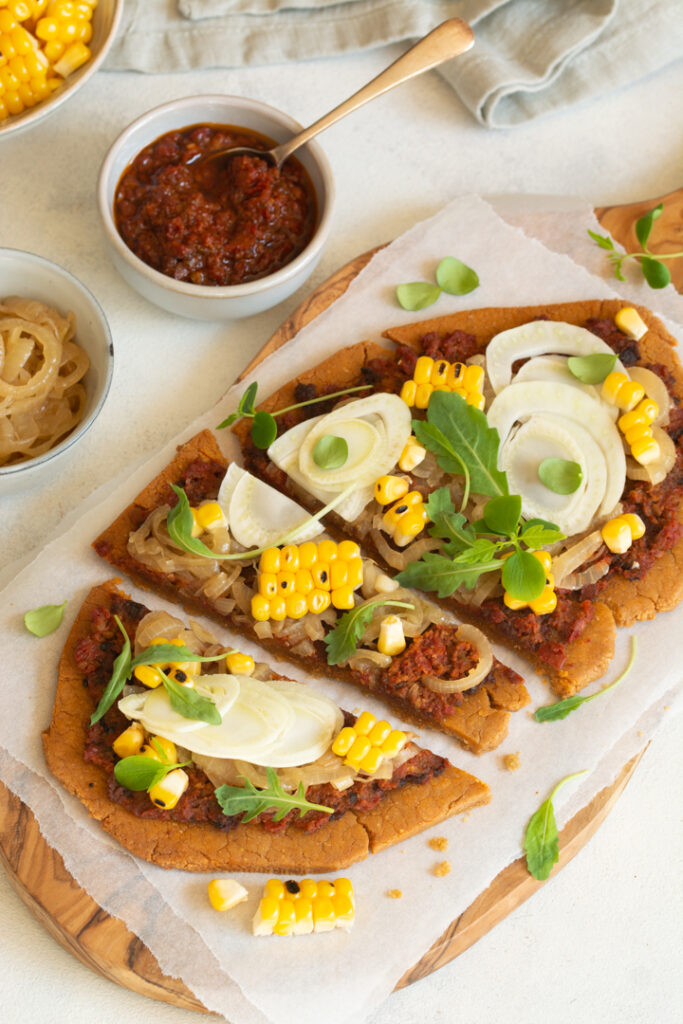