Does something which only requires three very basic ingredients and a bit of patience count as a recipe and deserve its own blog post? I wouldn’t always say yes to this question, but when it comes to caramelised onions I do. Because this particular combination of simple basics turns something nice into something truly amazing.

It’s as easy as frying onions, but plus the important patience factor. You want to let the onions cook slowly, on a low heat so they won’t burn, for long enough for them to release their sugars and develop that deep, satisfying, hearty caramel flavour. So we’re saying half an hour minimum and preferably a whole hour on the stove. But then your patience and occasional stirring will be rewarded with a full-flavoured addition to almost any dish you can think of. I made this particular batch to top my tofu scramble sandwiches, but it also adds immediate flavour and delicious texture to soups, salads, rice dishes, buddha bowls, pizzas, burgers, roast veggies, ……

So when you’re cooking dinner, you might want to consider putting a pan of sliced onions on the back of your stove. Give it an occasional glance, stir and attention and you’ll be a happy person for the rest of the week. 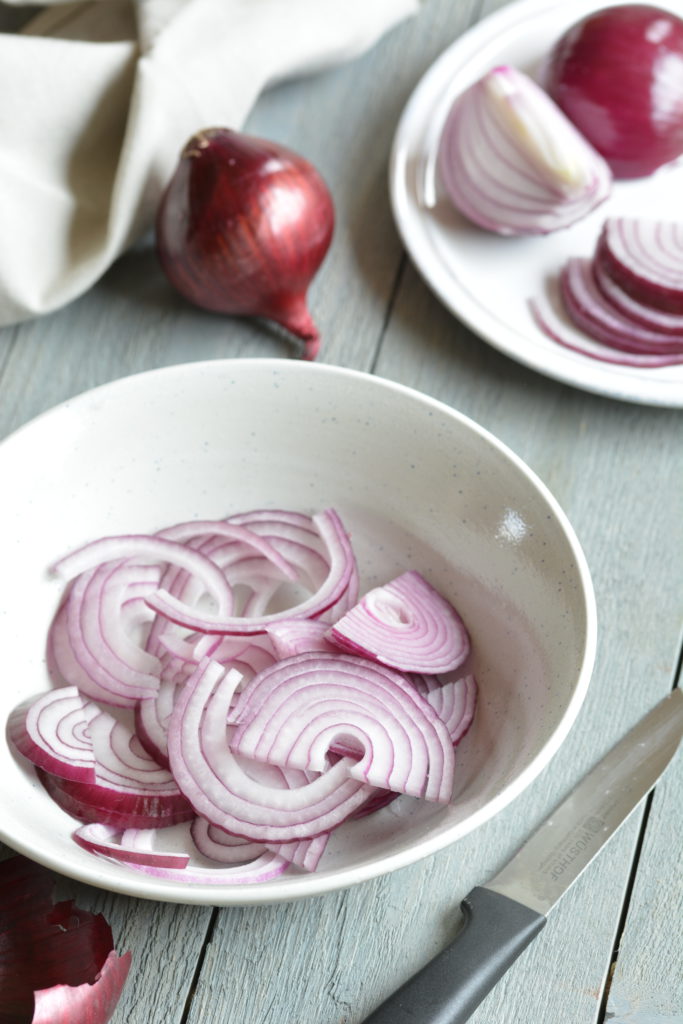 Heat the oil in a heavy-based pan. Add the sliced onions. Stirring regularly, fry the onions over a low to medium heat until they turn translucent. Now turn down the heat and leave the onions to caramelise. Give them a stir every few minutes, making sure they develop colour, but don’t burn.

After half an hour the onions will be very soft and sweet. The longer you leave them on the heat from this point, the deeper their savoury caramel flavour will become. Just keep an eye on them and stir them every now and then until they are done to your liking, every bit between now and up to another half hour.

When the onions are ready, turn up the heat and add the vinegar. Deglaze the pan and stir until the vinegar has evaporated, then turn off the heat. Season the onions with salt to taste, leave to cool and then add to the dishes of your liking.

The caramelised onions will keep in the fridge for up to a week, or for up to three months in the freezer, stored in small portions for use when needed.