Hooray for fall, it’s chestnut season again! In Germany, from this period on you can buy freshly roasted chestnuts on every corner, to singe your fingers and lift your spirits. With temperatures lowering, these warm, sweet chestnuts make the ultimate seasonal treat.

Here in The Netherlands you’ll mainly find the round, unrelated horse chestnut, which is good for seasonal decoration. The edible sweet chestnut is less common here, because there just aren’t that many chestnut trees over here. If you’re lucky enough to have access to local chestnut trees, it’s well worth the effort to go foraging for the fruits. You’ll recognise the chestnut trees by their singular, pointed leaves and their prickly burs, containing two or three nuts. Unlike horse chestnuts, these nuts are flattened on one side and have a pointed end with a small tuft at the tip. If you go out foraging, forget the wrinkled, dull-coloured fruits and only take the firm, shiny chestnuts just popped from their burs. In the absence of local trees, around this time you can also buy fresh chestnuts at some vegetable stores or farmers’ markets. Here, again, make sure the husks are smooth and firmly attached to the inner flesh. 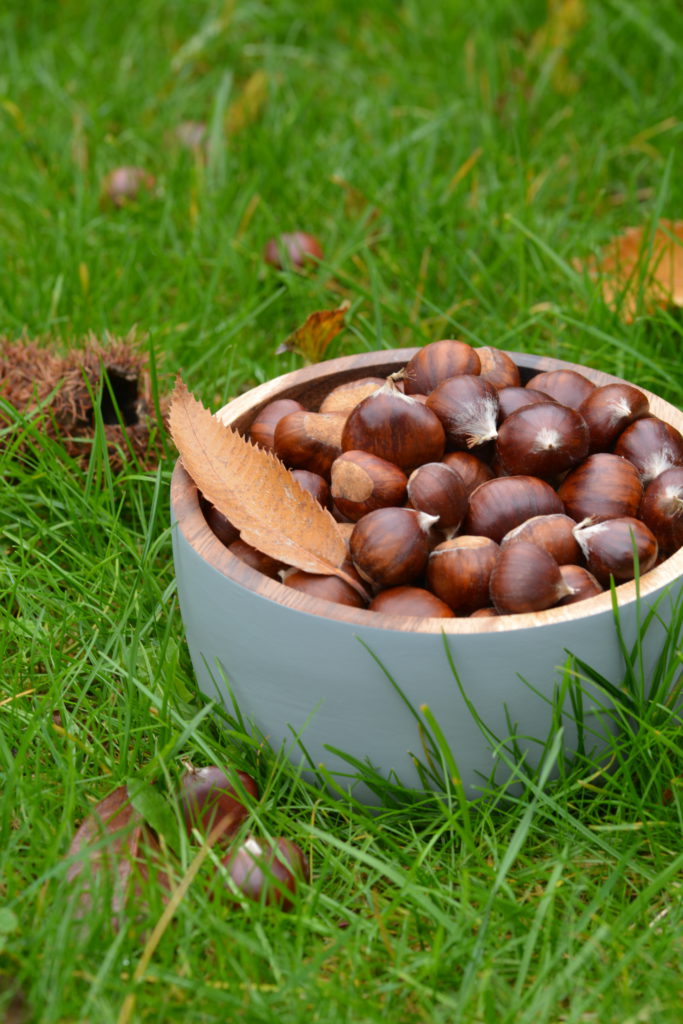 After obtaining them, you can head into the kitchen! Chestnuts are wonderful for roasting and immediate munching, but they also make an ideal base for sweet and savoury cooking.

They can be roasted in a large pan or by simply tipping them into the ashes of a barbecue or fireplace. Personally I think the easiest preparation mode is oven-roasting them: you can just pop them in and after 10-15 minutes they’re ready for eating or further preparation. Using a sharp knife, score the tips of the chestnuts. This lets out the steam during the cooking process, preventing the nuts from exploding in your oven. Apart from this, it makes peeling them afterwards a lot easier. Spread the chestnuts over a lined baking sheet. Roast them in the oven for 10-15 minutes until the husks curl away from the flesh. Briefly let them cool until cool enough to handle, then, while they are still warm, peel off the outer husk as well as the furry inner skin. Eat them as they are, or sprinkled with a little sea salt. The batch of chestnuts I collected in a garden filled with chestnut trees the other day, resulted in the soup you can see in the picture above. It’s a classic, French soup with a celery, bay and thyme base. Unlike what you might think based on the picture above, you won’t need a lick of cream to get the soup to be as creamy as it looks. To be honest, I only added the cream in the picture to lift the dish up from the mere beige and brown hues inherent to chestnut soup. But if you simmer the chestnuts in the stock, they’ll turn it into a velvety, nourishing soup all by themselves.

Roasting fresh chestnuts before adding them to the stock enhances their nutty flavour. If you’re not keen on peeling all those chestnuts, though, you can also prepare the soup with pre-packed, peeled chestnuts. Then, the cooking process will be effortless altogether. 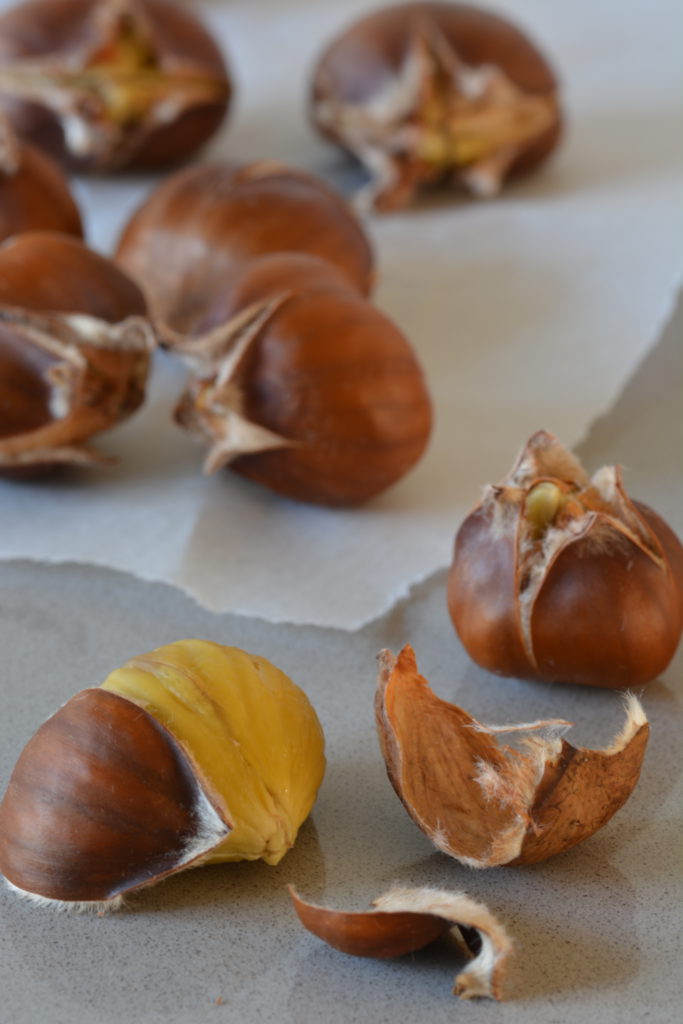 Using a sharp knife, score the tips of the chestnuts. Spread the chestnuts over a lined baking sheet. Roast them in the oven until the husks curl away from the flesh. Leave to cool for a minute, then peel them while they are still warm.

Heat the oil in a large pan. Fry the onion, carrot and celery until soft and lightly browned. Add the garlic and fry it until fragrant. Pour in the wine and bubble for a minute to let the alcohol evaporate.

Bind together the thyme, parsley, oregano and bay. Tip the chestnuts and the herbs into the pan. Add the stock and bring to a boil. Then lower the heat and simmer for 30 minutes until the chestnuts are completely soft.

Remove the herbs and bay, then whizz the soup until smooth. Flavour with black pepper and, if you like, with some extra salt. Garnish to taste with chopped fresh herbs, Greek yogurt, sour cream or plant based cream and serve with crusty bread. 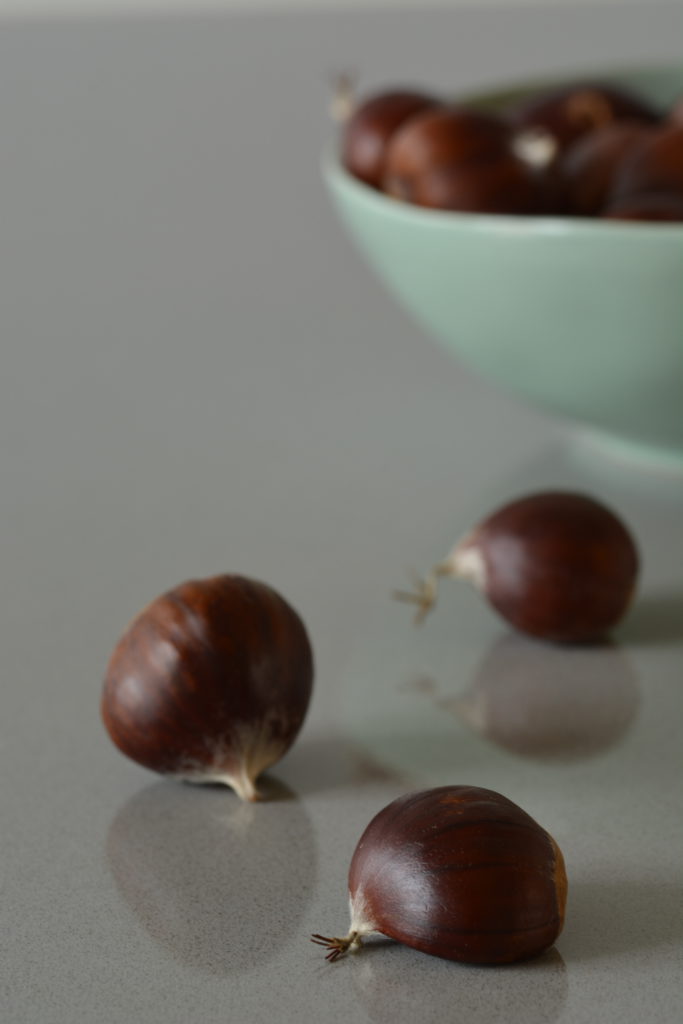