When I had dinner at my favourite restaurant the other day, I was served a little shot glass with gazpacho for an appetizer. Up till then, I have to admit, I always found gazpacho to be a bit of a dull dish, a mixture which wouldn’t make up its mind between being a cold drink and a watery vegetable puree. But what I was tasting here was a celebration of fresh and savoury flavours, making me wonder whether we were talking about the same dish. Could this be the result of simply whizzed raw tomatoes?

The chef’s secret sadly stayed in the kitchen, but this shot glass left me inspired to renew my opinion on the dish and to try and find out if I could achieve this much flavour with our late summer harvest. With the wonderfully ripe tomatoes to be found in the gardens and stores at the moment, this would be the best time to give gazpacho a second chance. 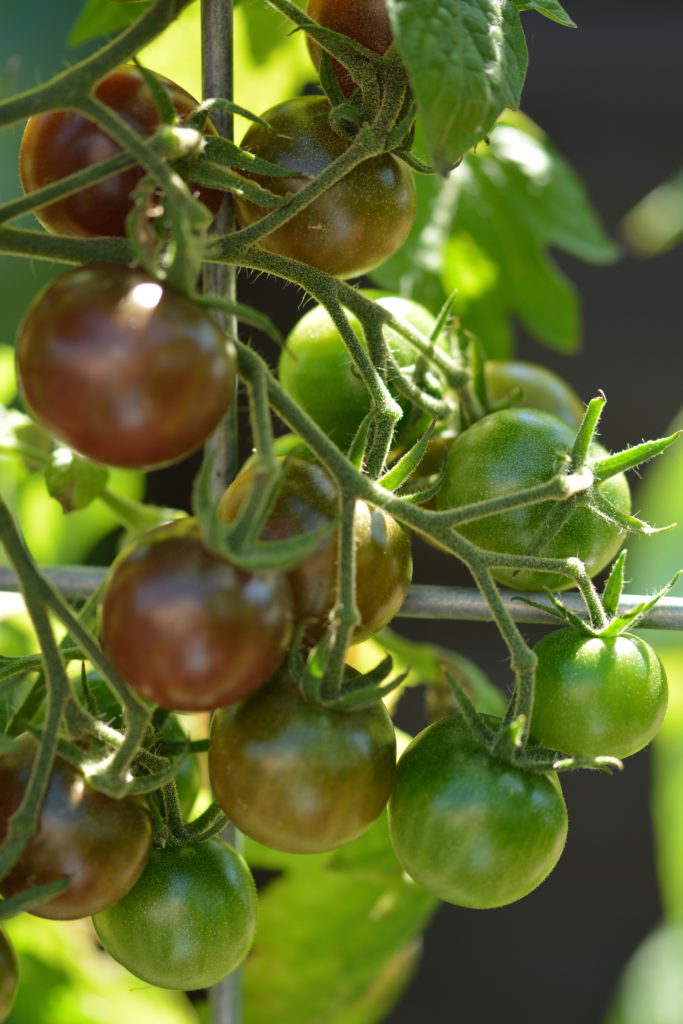 As I started to look into the possible ways to prepare the pile of beautiful tomatoes spread out on my work top, I was surprised to discover that this dish I had denounced as being dull was in fact the topic of vehement online discussions. On the most authentic mode of preparation, the colour and flavour it should have and the ingredients it absolutely had to or shouldn’t contain: bread or no bread, a little or lots of olive oil, green Spanish peppers or just regular ones, added or absent onions, chillies and olives and, a nice modern twist according to some, while a terrible idea according to others, the addition of fruits. 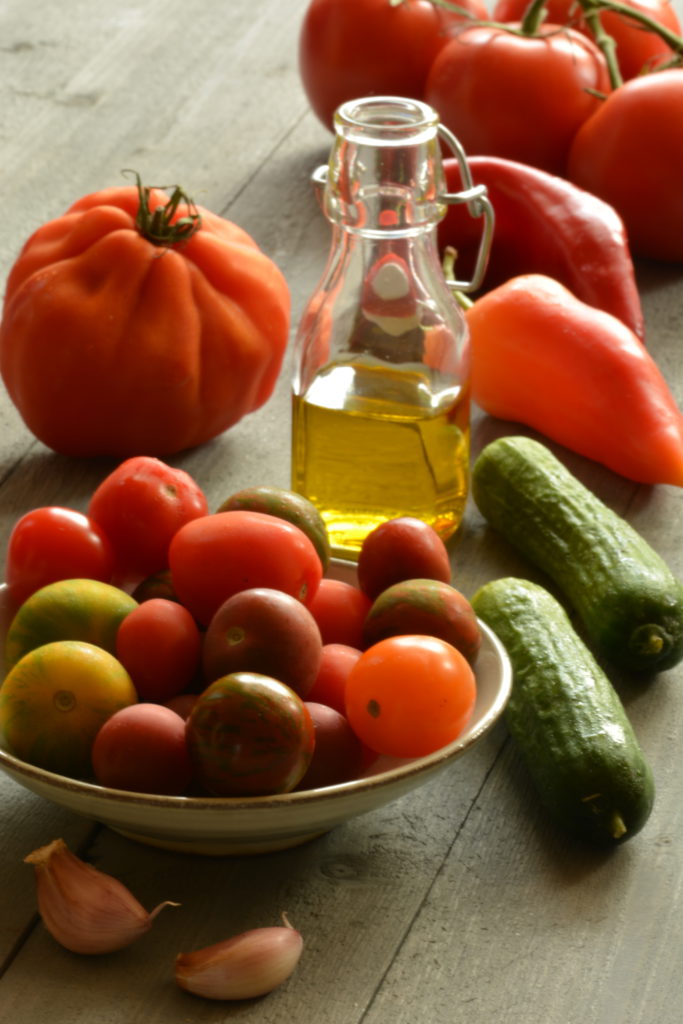 In order to choose a direction amongst all these strong opinions, I headed into the kitchen and tried a few of the basic modes of preparation. Originally, this cold Spanish soup is said to have been made with whichever vegetable being ripe and available at the time, fixed elements being bread, garlic, olive oil and water. The most common modern ingredients are tomatoes, peppers and cucumber, so that’s where I started. Since I wasn’t sure if bread wouldn’t make the soup starchy and bland, I first whizzed only the vegetables and the garlic. The resulting mixture had a wonderful flavour, but after straining it soon separated into liquid and solids. As it turned out, the addition of pre-soaked and squeezed bread to the blender didn’t affect the flavour, but it made the soup nicely creamy and homogeneous. Apparently, this isn’t a classic element for nothing.

The addition of olive oil varies among different recipes from none at all to almost a third of the total amount of soup. Healthy and good as olive oil may be, I personally favour primarily tasting the vegetables. So I’ll tip it in, but in rather moderate amounts…

The answer to the question whether or not to use ready-made passata or canned tomatoes as a base or to add tomato puree in order to enhance the flavour, in my case is mainly a matter of principle. In my opinion, the goodness of gazpacho is the pure flavour of terribly ripe, fresh tomatoes and if they’re not available, I’d rather opt for making a different dish altogether. In that respect it seems to be a happy coincidence that tomatoes are at their best in that warm summer period when you most want cool, light, savoury snacks.

Then there’s the practical aspect of cooling. Many recipes end with the “serve with ice cubes” tip, which makes the soup look fresh and nice, but also dilutes the flavour. In order to prevent that last bit, I freeze part of the soup in an ice cube tray while the rest of it cools in the fridge: ice-cold, full-flavoured soup guaranteed.

It’s fun to see how many routes you can take with this dish. Many of the points of dispute appear to be taste-dependant. The addition of red or white onion, for example, turns out not to be mine. Instead of these, Gordon Ramsay chooses to blitz spring onions with the rest of the veg. In the end I like it best if the oniony flavour is added apart, for example by sprinkling over sliced spring onions or chopped chives.

And watermelon, beetroot or cherry gazpacho? I’ll postpone these for now, although I’m curious to hear your opinions and experiences in this area! Below you’ll find the recipe for a classic savoury gazpacho, made according to my taste. Served in little shot glasses with a homemade herby crouton, the way it was served to me at the restaurant. 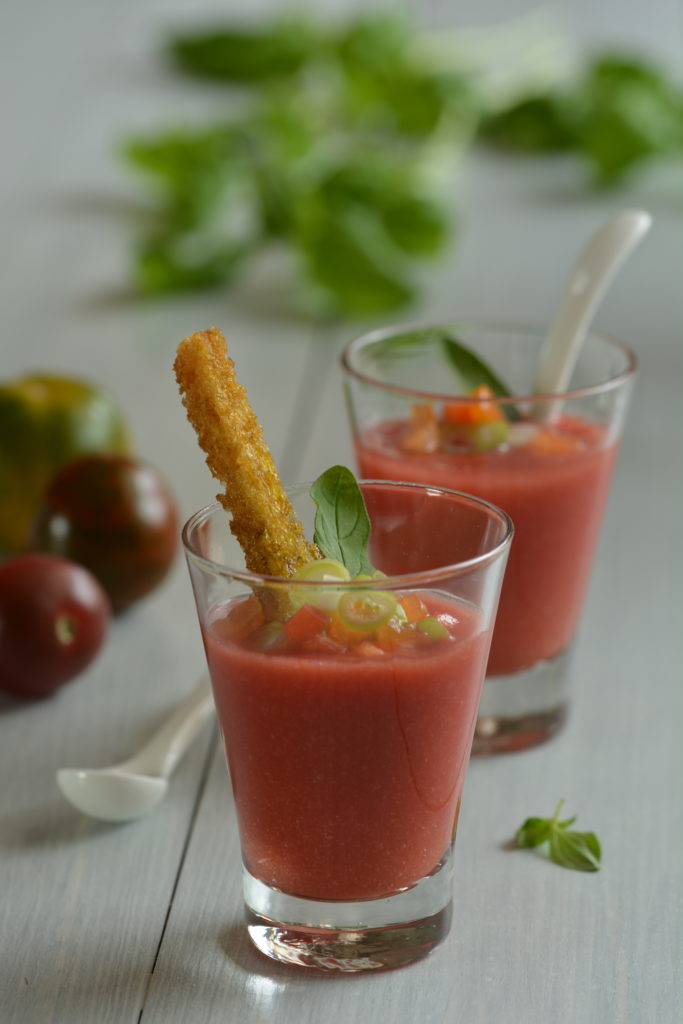 topping to taste, for example:

Tip the tomatoes, cucumber, pepper, garlic and jalapeño in a blender and whizz until smooth. Squeeze the water from the bread, add the pieces to the blender, then whizz for a few more seconds.

Pour the mixture into a fine sieve over a bowl. Strain the soup, using a wooden spoon to push the liquid through. Discard the solids. Season the soup with the vinegar, salt and freshly ground pepper.

If you want to serve the gazpacho really cold and in larger glasses, pour a little of it into an ice cube tray and put it in the freezer. Mix the rest of the soup with the olive oil. Cover the bowl with cling film or pour the soup into a glass jug, then put it in the fridge for at least two hours.

Finely chop the basil and oregano leaves and stir them through the olive oil. Cut the bread into long, ½ cm-thick strips. Brush them with the herb oil and put them onto a lined baking sheet. Sprinkle with sea salt and freshly ground black pepper, then bake them for about 15 minutes until golden and crisp. Cool the croutons on a sheet of kitchen paper.

Serve the gazpacho in large glasses for lunch, with a frozen gazpacho cube for additional cooling. Alternatively, serve it in small shot glasses for a refreshing starter, with a herbed crouton and an oregano leaf. Drizzle over a few drops of the herb oil and garnish with the toppings of your choice.