Apple pie season is here! The unusual heat wave of the last two months has left most of my newly sown veggie plants cropless, but our old apple tree managed to produce a beautiful batch of apples as if nothing has been the matter. So now that tempertures are dropping, what can be better than turning on the oven and filling the house with the wonderful scent of cinnamon and apple pie? 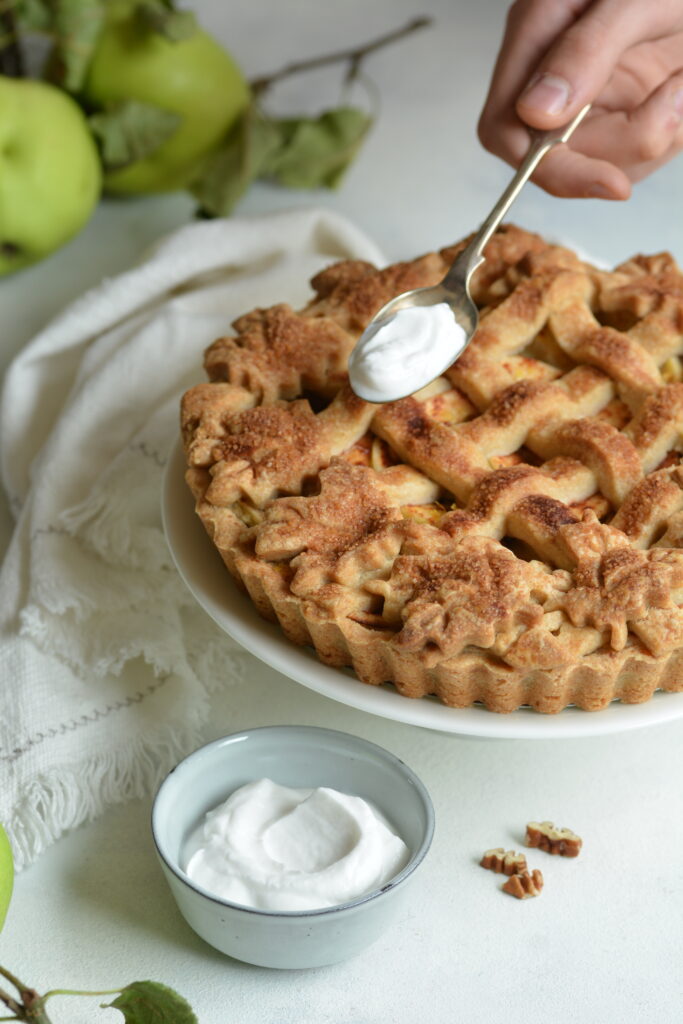 This particular recipe is special to me, as it is one I have wanted to venture for a long time. It’s my personal adaptation of my mum’s apple pie – the one with the crisp and buttery crust, the zesty apple and nut filling and the amazing cinnamon and vanilla flavour. Up till today, for as long as I can remember, this has been the requested cake for any celebration, with as the best part the small pieces of unbaked pie dough she kept – and still keeps – for us to munch on.

Since going vegan I have been wanting to veganise her recipe, as I’m convinced that nobody should have to do without apple pie in their lives. And this is the result: all the classic goodness with a few of my personal twists, approved by both my mum and my girls. Made with vegan butter, the vanilla-flavoured pie crust is wonderfully crisp and crumbly. I used a mixture of plain flour and buckwheat flour, which gives it a slightly dark and nutty flavour pairing deliciously with the apple and cinnamon filling. If you prefer, though, you can make it using only plain flour, or, to make it gluten free, replace the mixture with a 1:1 gluten free flour mixture. 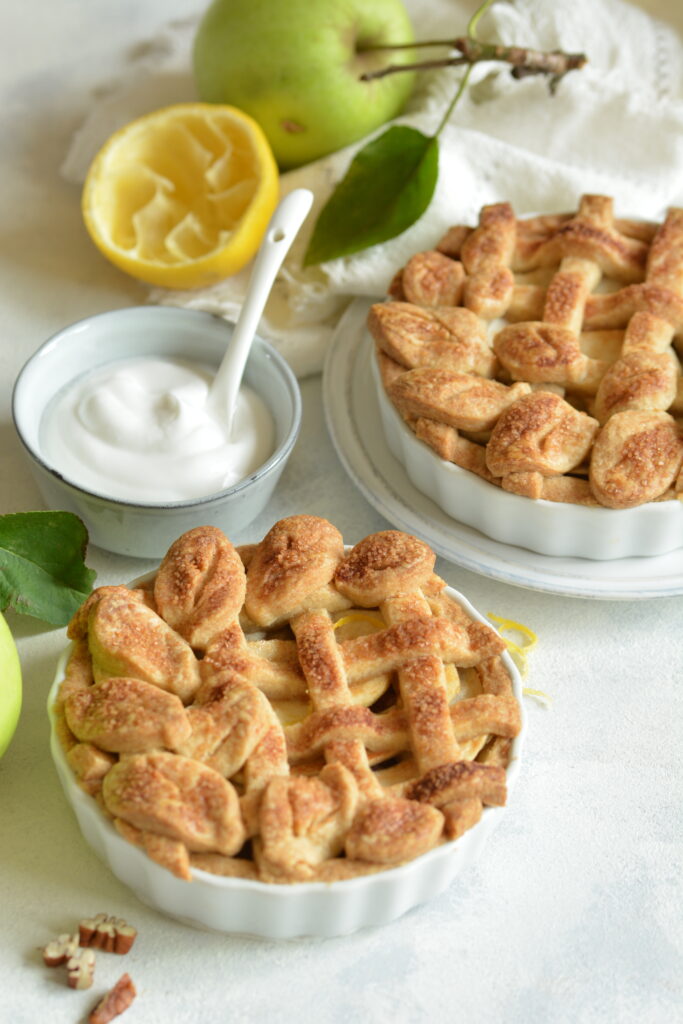 The filling combines sweet-flavoured pecan nuts with a generous layer of sliced apples. The apples are flavoured with lemon juice and grated lemon zest and topped with a mixture of cinnamon, cardamom and raw cane sugar. As the apples from my tree are quite sweet already, the sugar is mainly intended to balance the acidity of the lemon juice here. Depending on the type of apples you use, and of course on your personal sweet tooth, the sweetness of the apples alone can be enough to ensure a sweet, slightly tart and juicy filling. If this matches your taste, you can choose to leave the filling unsweetened with just a dusting of the spices, and use only a spoonful of cinnamon sugar to sprinkle on top of the pie crust. When it comes to the top layer of the apple pie, this is where the fun really starts. Roll out your dough and get creative! You can opt for a classic thin- or broad-stripped lattice frame, or add braids and twisted ribbons of dough. You can use cookie cutters to add decorations, or instead, top the pie with an intact layer of dough and use the same cookie cutters to cut out decorative openings. Let yourself be inspired by the approaching autumn – and be sure to keep some of the unbaked pie dough for munching. 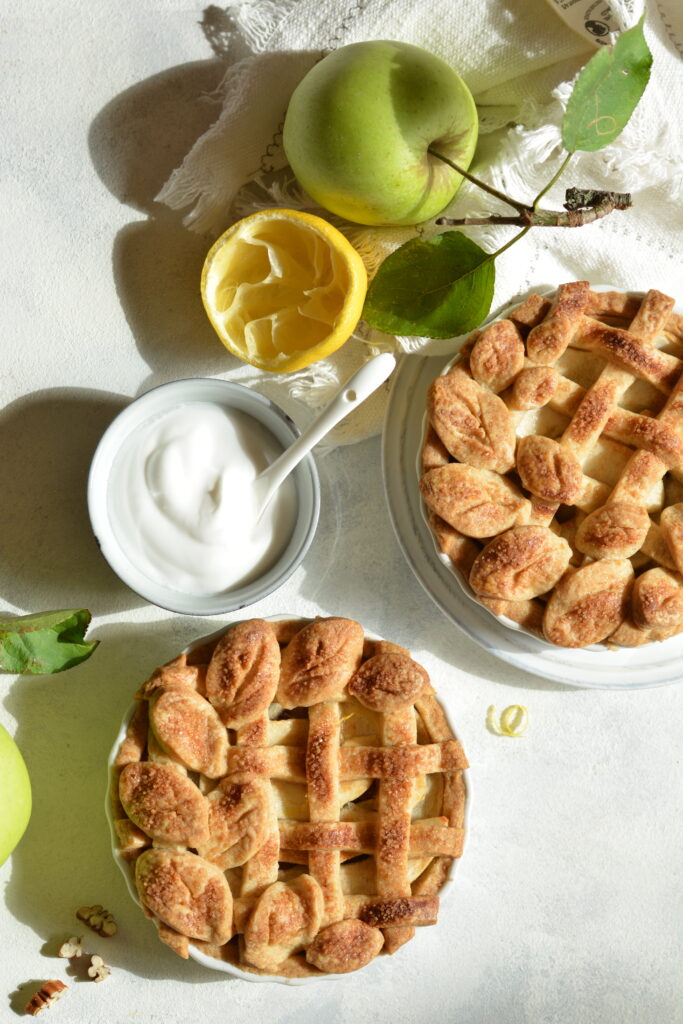 *)  If you prefer, you can replace the plain flour/buckwheat mixture with 400 g of plain flour, or, to make it gluten free, replace it with a 1:1 gluten free flour mixture. To make the dough, mix the flours with the caster sugar and salt. Tip the vegan butter, vanilla extract and the flour mixture into the mixing bowl of a food processor and whizz until crumbly. If you prefer to leave the food processor out of it, add all ingredients for the dough to a large mixing bowl and use two knives to cut the butter into small cubes while it’s covered in the flour mixture. Using your finger tips, rub the butter into the flour until the mixture resembles fine crumbs. Bring the crumbs together to form a firm ball of dough. If the mixture is too dry, add a few drops of almond milk until the dough comes together. Divide the dough in two equal portions, one for lining the tart case and one to make the top layer. Keep the dough covered in the fridge until using.

Lightly grease the tart tin, or the individual cake tins, if using. Roll out the second portion of dough. Top the apple slices with the dough in the way you like best. I made a thin-stripped lattice frame so the apple filling would remain visible and used cookie cutters to top the frame with decorations. Alternatively, you can all but cover the filling using a broad-stripped lattice frame, or cover the pie entirely with the rolled-out dough. If you do so, make sure to puncture the pie crust before baking, either with a simple slash or a decorative pattern, to enable any steam to escape. 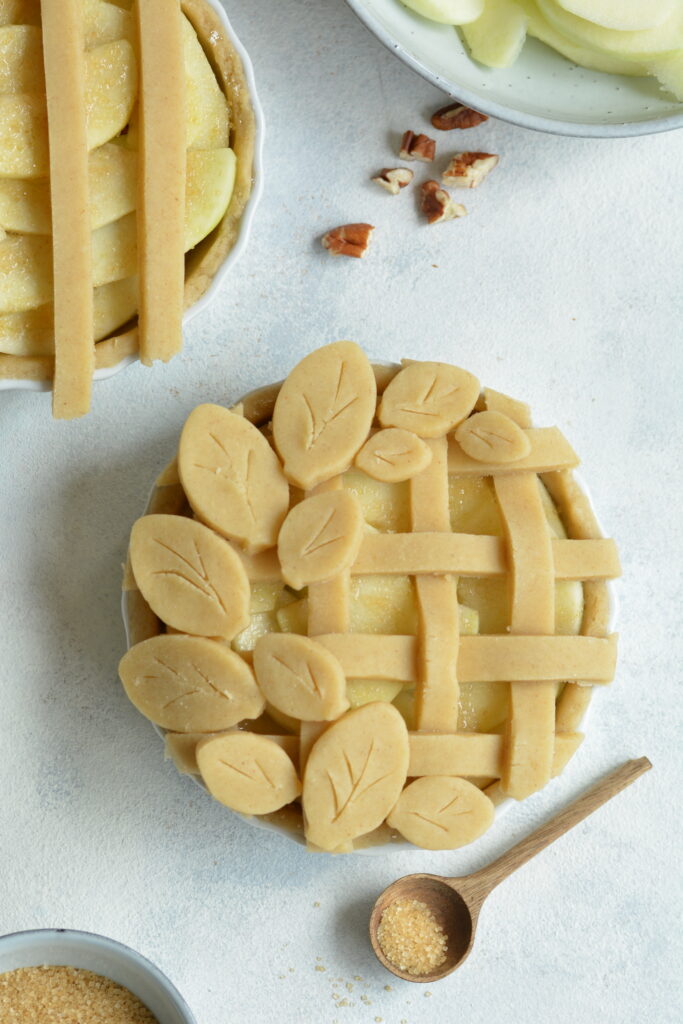 Brush the pie crust with the almond milk, then sprinkle with the remaining cinnamon sugar.

Bake the pie for 45-50 minutes until golden. When making individual apple pies, reduce the baking time to 25-30 minutes.

Leave to cool, then serve with a dollop of coconut yogurt or whipped cream. 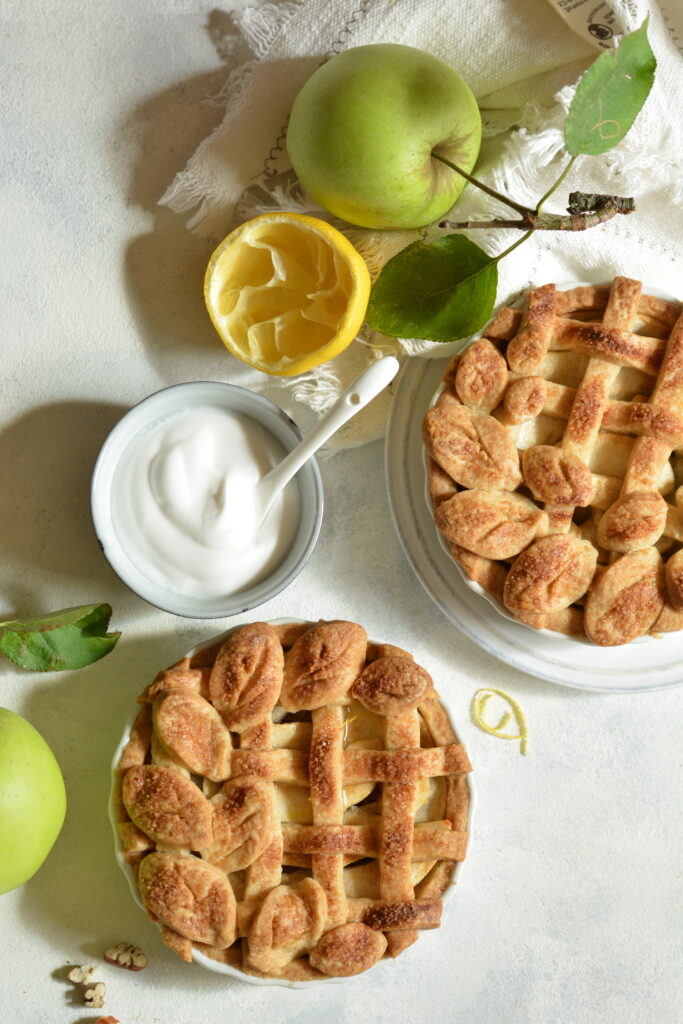