Citrus season is in full swing. Next to regular oranges and tangerines, blood oranges, kumquats and tangelos are widely available at the moment and in these cold, snowy days their pop of colour and fresh flavour are more than welcome! So what better way to boost your mood than with a luscious, citrus-centred sweet treat? Enter this zesty and creamy vegan lemon tiramisu. 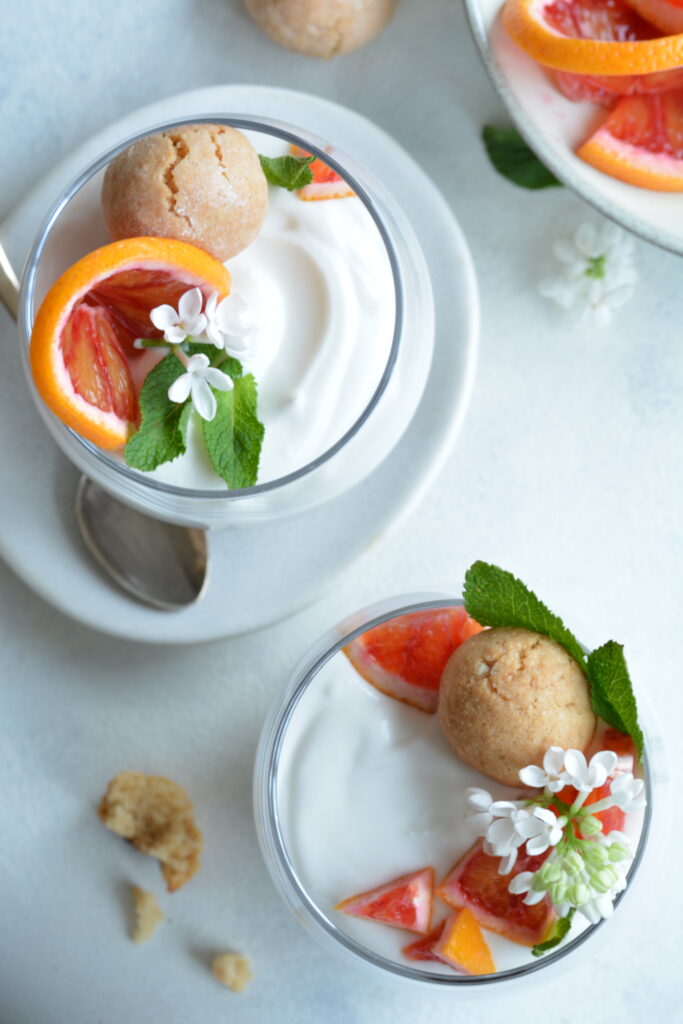 This vegan lemon tiramisu is my adaptation of an old personal favourite dessert. Traditional tiramisu al limone is a classic for a reason. It pairs tangy and creamy mascarpone with a soft layer of syrup or liqueur-infused cake or biscuits and as a non-vegan, this combination makes you want to clean your dessert glass with your tongue. The happy news is, as I found out after some experimenting, that you can make this treat just as luscious and delicious using only plant-based ingredients. 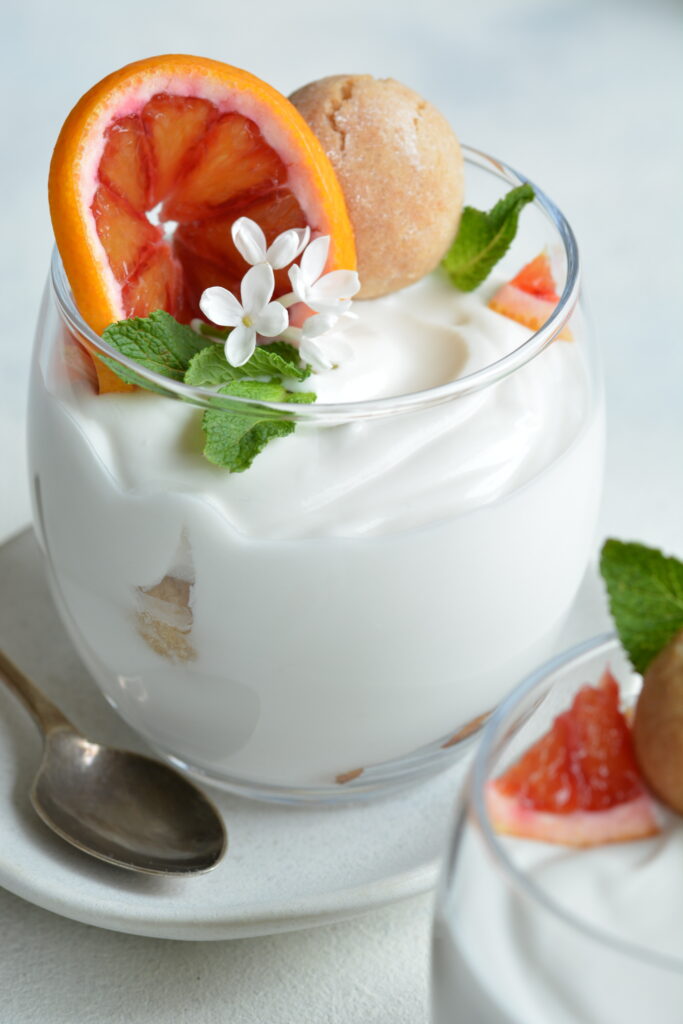 As the wide range of available recipes for vegan coffee tiramisu demonstrates, there are many ways to create the creamy layer, using combinations of soy or nut-based ingredients, aquafaba and even vegan butter. For this lemony version I used a simple combination of coconut cream and oat-based crème fraîche and I’m very pleased with the result! The creamy layer is soft and fluffy, with just the right consistency. The coconut cream adds natural sweetness, while the crème fraîche brings in a pleasant tang. The cream is flavoured with vanilla seeds, grated lemon zest and a splash of lemon juice. And in case you were worried: it doesn’t taste like coconut, only like delicate, lemony goodness. 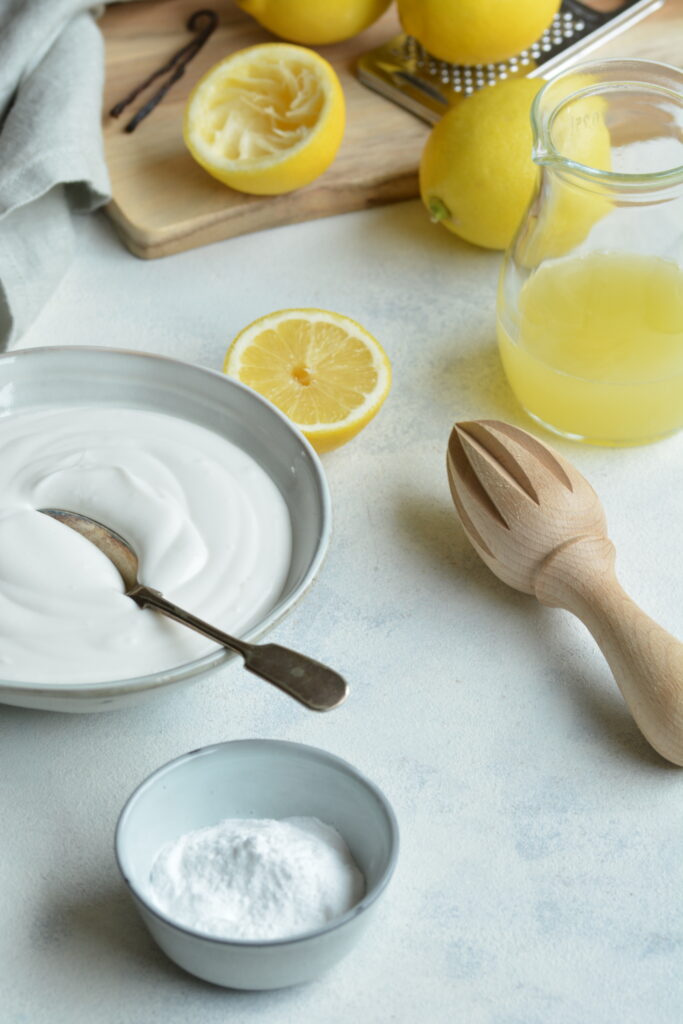 For the biscuit base I used a batch of freshly baked amaretti, infused with zesty orange flavours for the occasion. As I made this treat to be enjoyed by both children and adults, I drizzled the amaretti with a homemade, non-alcoholic orange syrup. If you intend to serve this to grown-ups only – let’s say on upcoming Valentine’s Day – you could opt for a boozy version instead and replace the syrup with an orange liqueur of your choice. 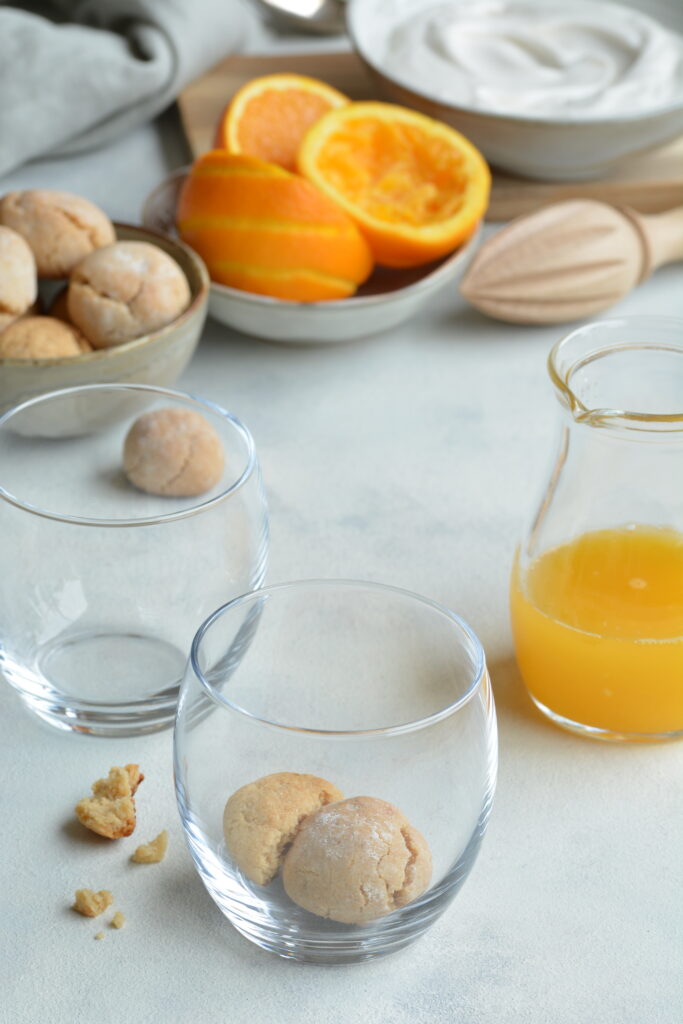 Before you start whipping your cream, a word of warning to ensure you get the best result. When you combine cream with fresh lemon juice, the acidity of the juice, combined with over-whipping, may cause the cream to separate. As I love the clean flavour of fresh lemon juice and prefer it to using lemon curd, I tested the recipe especially on this aspect. After tweaking the preparation mode and the amount of juice used, I have a few tips to prevent unpleasant surprises. Make sure the creamy ingredients have the same temperature when you start, so preferably use them straight from the fridge. Whip them with the lemon zest, vanilla seeds and sweetener until creamy and fluffy. Then put away the electric whisk and gently fold in the lemon juice with a spoon. This will leave you with a fail-safe, airy cream with both the best texture and flavour. 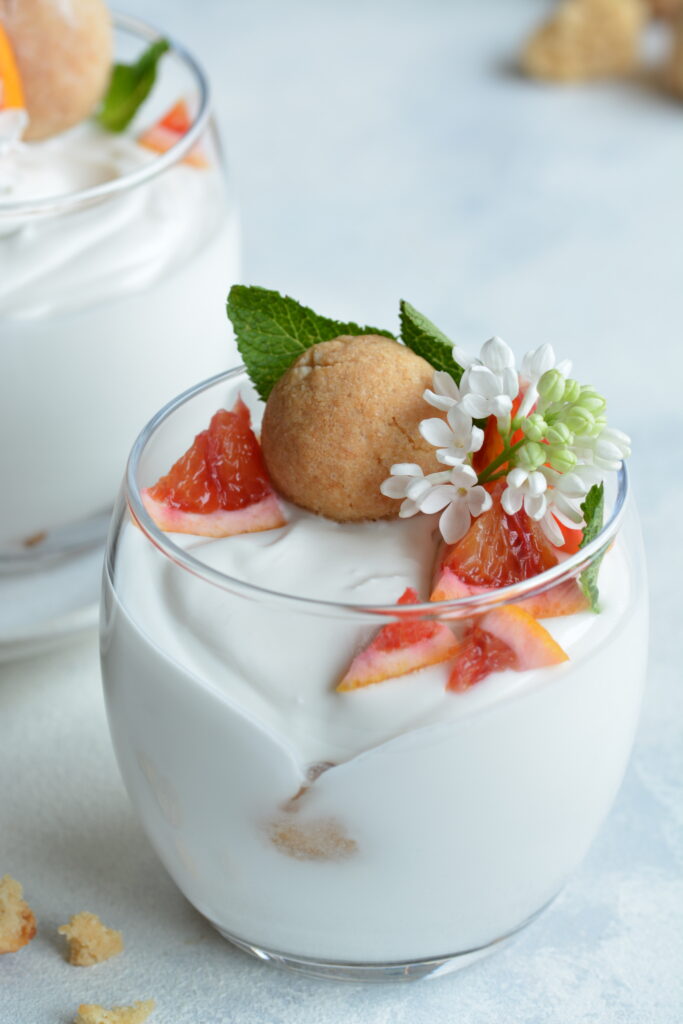 Now simply layer your dessert glasses with the infused amaretti and lemon cream. The tiramisu is delicious eaten directly after assembly, but it’s even better when chilled for a few hours or even overnight, making it a perfect prepare-ahead treat. Serve decorated with citrus slices, mint sprigs and an extra almond cookie and prepare for citrussy bliss. 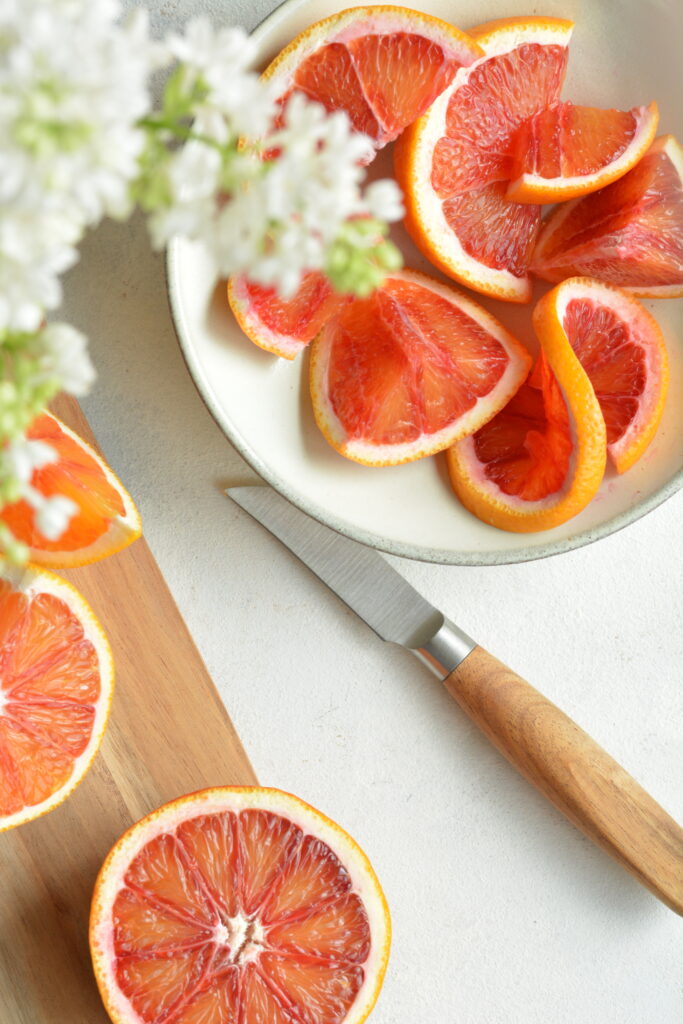 *) I infused the amaretti with a non-alcoholic homemade orange syrup. For a boozy version, you can replace this syrup with 5 tbsp. orange liqueur, or use a mixture of both.

**) For this recipe you’ll only use the coconut cream from the tins. For easy removal of the cream, make sure to put the tins upright in the fridge the night before you plan to make the tiramisu. As it cools down, the cream will rise to the surface and firm up, so you can simply scoop it from the tin the next day. The remaining coconut water can be frozen for later use in soups, stews or coconut rice.

***) The amount of sugar added sweetens the cream according to my personal taste: lightly and not too much. Of course, feel free to add more if you prefer. 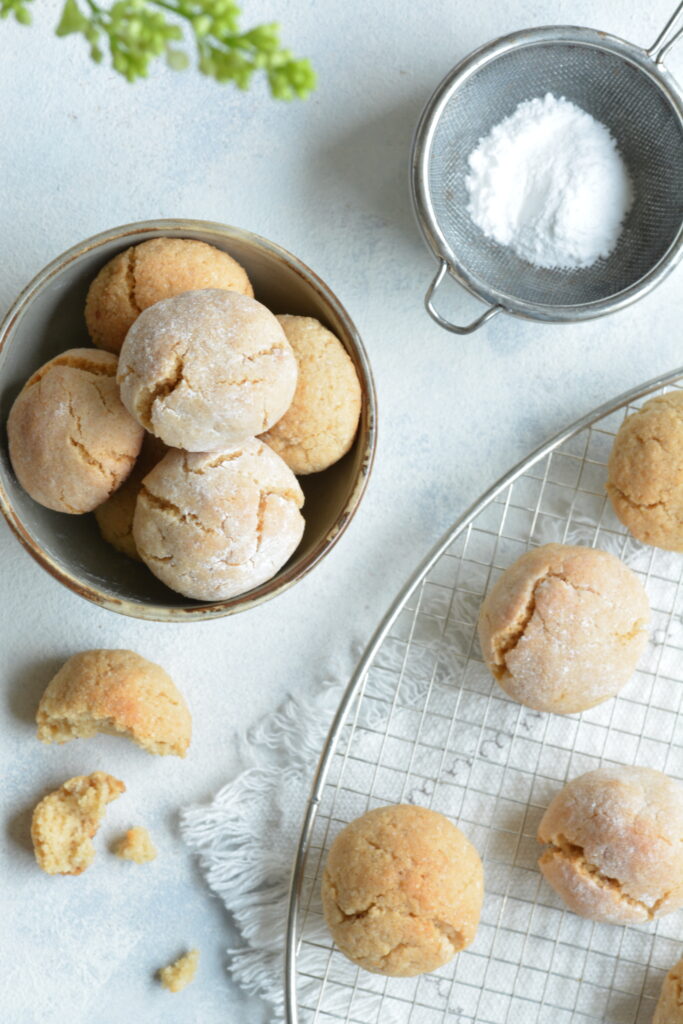 To make the orange syrup, mix the orange juice, orange zest and sugar in a small pan. Bring to a low simmer, then reduce slightly. Turn off the heat. Leave to infuse and cool completely before using.

To make the lemon cream, carefully scoop the firm upper layer from the tins of coconut cream. Put the cream in a large mixing bowl. Save or freeze the remaining coconut water for later use.

Using an electric whisk, whip the coconut cream until smooth and fluffy. The consistency of coconut cream can vary between tins, even within the same brand. If it comes out of the tin hard and lumpy, giving it a quick whizz with a stick blender before whipping makes the latter a lot easier.

Add the oat cream, vanilla seeds, sugar and lemon zest. Whip until the mixture is smooth and the vanilla seeds are evenly distributed. Depending on the thickness of the resulting cream, add ½-1 tbsp. of the whipping cream stabiliser and mix to get an airy, spoonable cream. Now add the lemon juice and gently fold it in with a spoon. Don’t over-beat, or the mixture may start to curdle. 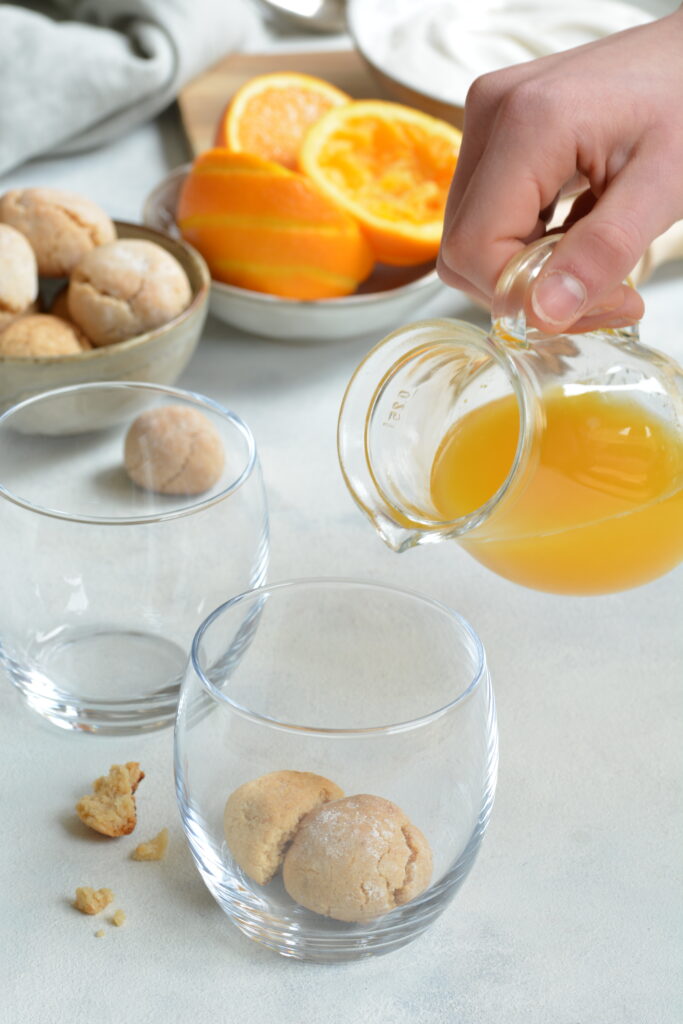 Get four glasses ready. Put 1 amaretto in each glass. Remove the orange zest from the orange syrup. Drizzle the amaretti with 1-2 tbsp. of the orange syrup each (or with orange liqueur, if you chose the boozy option).

Spoon over the lemon cream. Top the lemon tiramisu with orange slices, sprigs of mint and an extra amaretto. 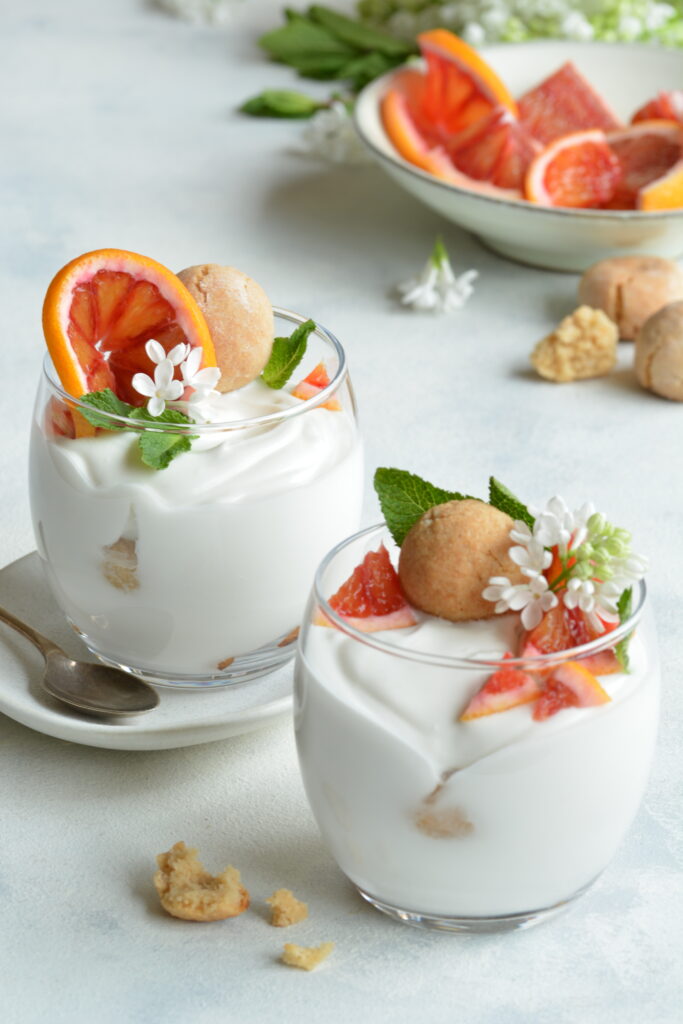