When comfort food is called for, steamed buns are the thing. There’s just something about these pillowy Chinese rolls that makes you forget everything around you the moment you sink your teeth in them. You can buy them fresh or frozen at supermarkets and oriental stores, but did you know it’s actually quite easy to make them at home? Not only do they taste infinitely better, but making them from scratch gives you the opportunity to fill them with anything – and only those things – you love. The recipe below is a long-standing favourite of mine and a regular request by my girls and their school friends. So if you’d like to give it a try, I’ll guide you through step by step. 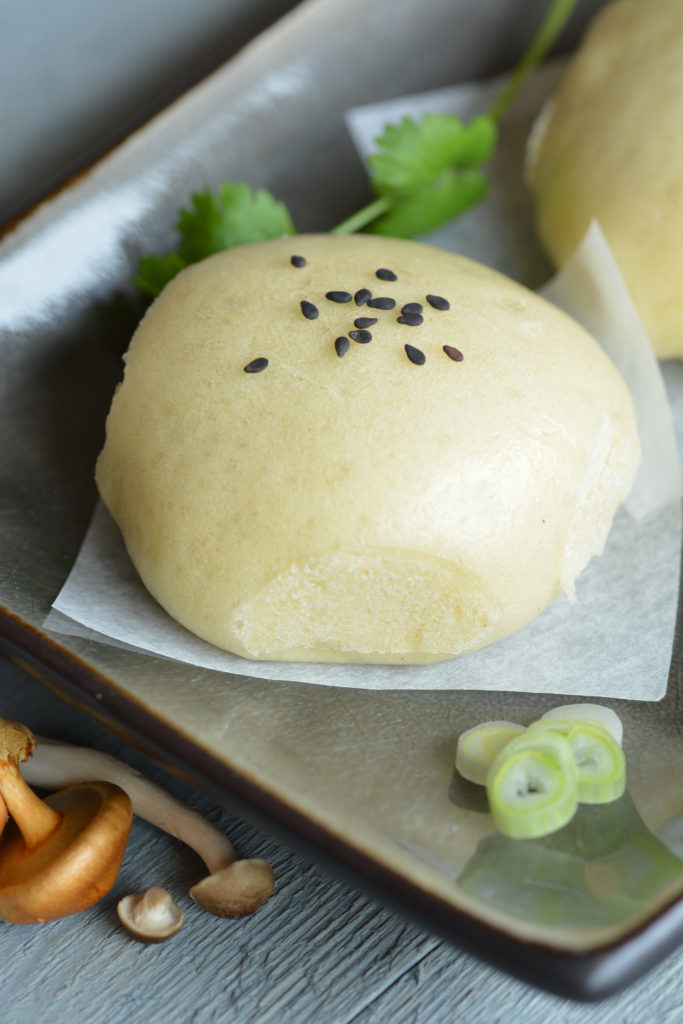 When googling, steamed buns or bao buns emerge in different varieties. On the one hand you have the fluffy discs of bread that are folded over and stuffed with toppings after steaming. On the other, you have the pillowy clouds of bread with a surprise filling already inside. Traditionally, the filling can be sweet or savoury, ranging from different kinds of meat to vegetables or even bean or seed pastes. In the version below, the buns are stuffed and sealed before steaming, so you can enjoy them the second they come out of the steamer. As for what’s inside, I’ve gone for a savoury, bold-flavoured plant-based filling that provides a nice contrast to the slightly sweet and fluffy dough. The buns can be made either with chilled dough, using baking powder as the leavening agent, or with warm yeast-proved dough. In both cases, the resulting steamed bread will be equally fluffy. Personally, though, I very much favour the use of yeast-risen dough, as its airy, moist and elastic structure makes filling and shaping the buns so much easier. And then I cheat a little by mixing in some baking powder as well, for an extra pillowy result.

So when making the steamed buns below, start by putting a bowl of kneaded dough in a warm spot, so it can prove while you chop up the ingredients for the filling. 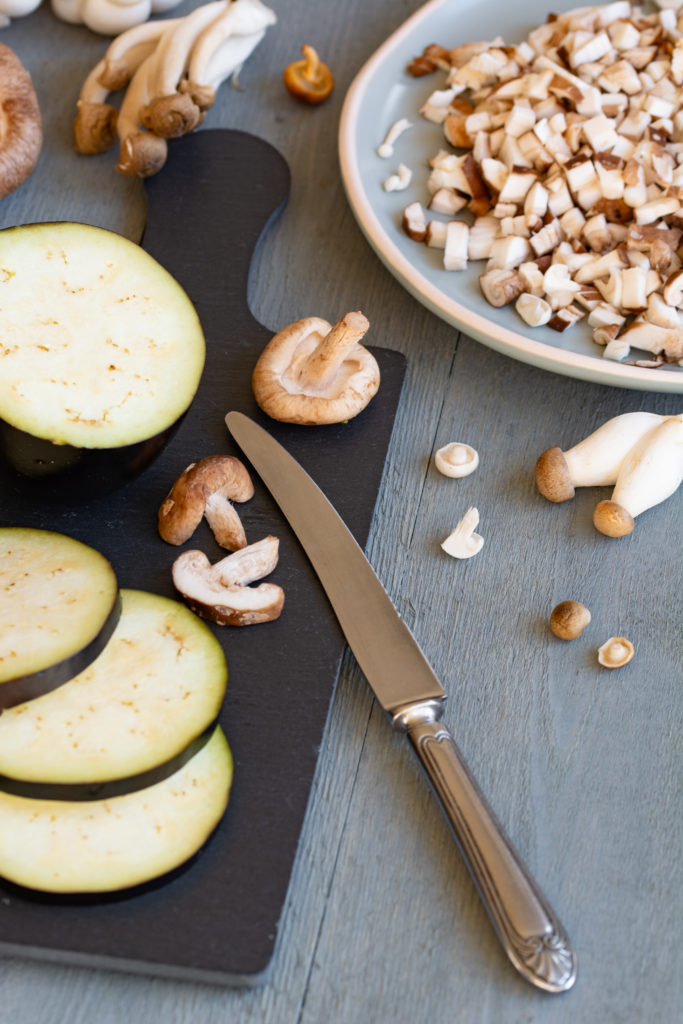 The filling combines savoury mixed mushrooms with aubergine, ginger, garlic, spring onions and a sticky, peppery hoisin glaze. The mixture used for glazing is quite addictive by itself. I sometimes use it as a quick dipping sauce to go with summer rolls and if you like, you could double the quantities in this recipe and use half of it as a dipping sauce for the steamed buns as well.

Simply fry the vegetables and stir in the sticky glaze and you’ll end up with a stuffing that’s both extremely delicious and very pleasing texture-wise. 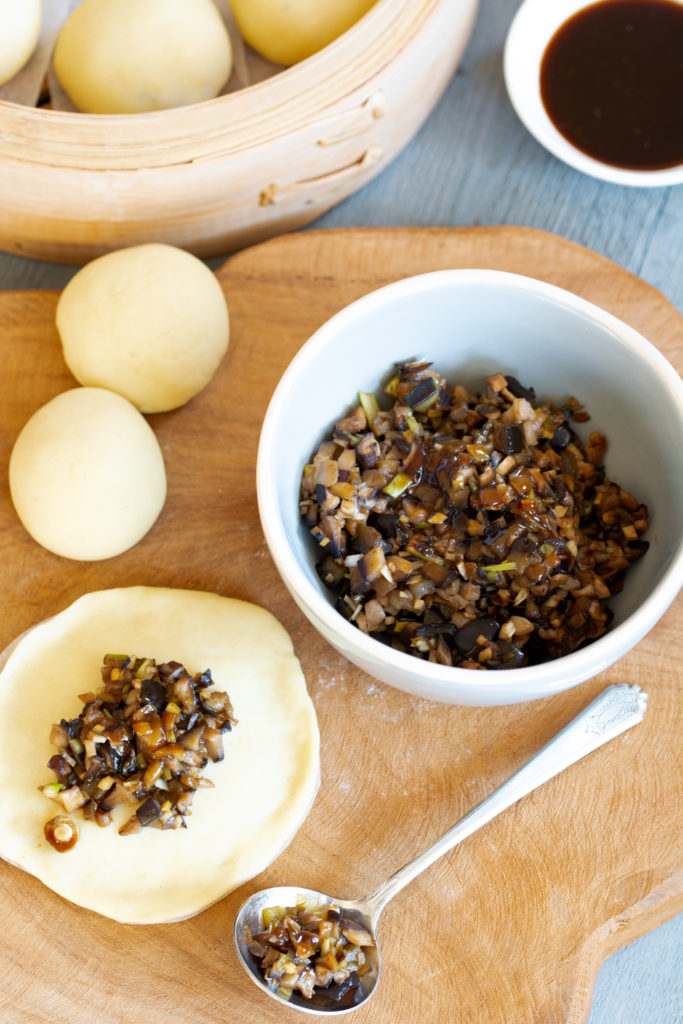 Now it’s time to get your steamer ready and practise your folding skills! After stuffing the dough and shaping it into little round balls, these are left to prove a second time until soft and puffy. The ones that fit inside the steamer can prove there until ready to be cooked; the rest of them will have to wait covered on a tray until the steamer is emptied for a second batch.

For steaming, I use a stackable set of bamboo baskets which I fit inside a large pan. This allows me to steam about 10 buns in one go. Alternatively, you can use a metal steamer or even place a metal sieve or colander over a pan of boiling water and cover it with a lid. Just make sure to adjust the number of rolls you fit inside your steamer, as they will increase in volume quite a bit during both the second rise and the steaming. Steam the buns over a layer of boiling water, making sure the water doesn’t touch the buns directly. Then, for optimal enjoyment, eat them as soon as they’re done!

After cooling the buns will keep well in the fridge, which makes them perfect as a breakfast indulgence or packed lunch the following day. They also freeze well, so it may not be a bad idea to make a double batch while you’re at it. Simply steam again until completely warmed through for a fresh and fluffy treat whenever you fancy one.

I hope you’ll love these buns as much as we do. And if you give them a try, I’d love to hear!

Recipe updated from the one originally posted November 2017, with much-needed picture improvement 🙂

And if you’re in the mood for more Asian food, you might also like my golden laksa with soba noodles and green veg, my vegetarian tom kha or my maki sushi with black rice and marinated carrot. If you like, you could make a double batch of the marinade and use half of it as a dipping sauce to go with the steamed buns. Start by preparing the dough. 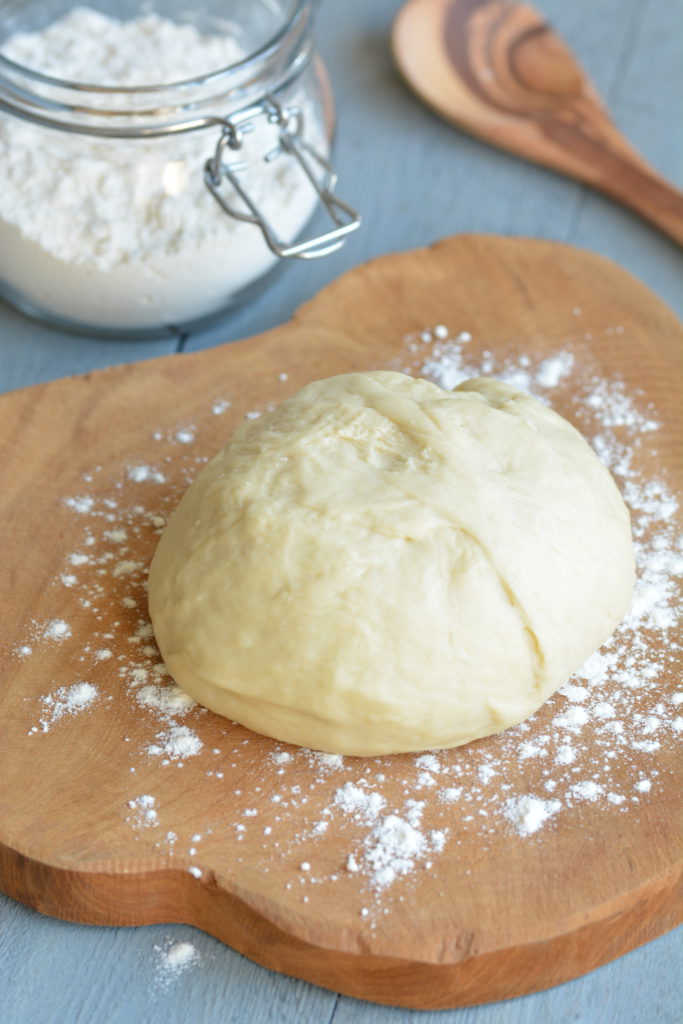 In a measuring jug, mix the warm water with the yeast and the sugar. Set aside in a warm place to activate the yeast. After 5-10 minutes the mixture should be foamy and increased in volume.

In a large mixing bowl, mix the flour with the baking powder. Add the oil and the yeast mixture. Using your hands, mix the ingredients until they come together, then knead for 5 minutes until the dough is smooth and elastic, adding a little more flour if the dough stays sticky. Lightly brush the mixing bowl with vegetable oil, then place the dough in the bowl and turn until covered in oil. Cover the bowl with a towel and set aside in a warm place for an hour.

While the dough is rising, prepare the filling.

In a small bowl, mix the hoisin sauce with the soy sauce, sesame oil and maple syrup. Season generously with black pepper and set aside.

Heat half of the oil in a frying pan. Add the diced aubergine. Stirring regularly, fry the aubergine over a high heat for 5-10 minutes until tender and lightly browned. Add the remaining oil, along with the chopped mushrooms. Fry for another 5-10 minutes, until the liquid has evaporated and the mushrooms are browned. Add the garlic, ginger and chopped spring onions and sauté for a minute, then pour in the marinade. Simmer briefly, then turn off the heat and leave to cool. 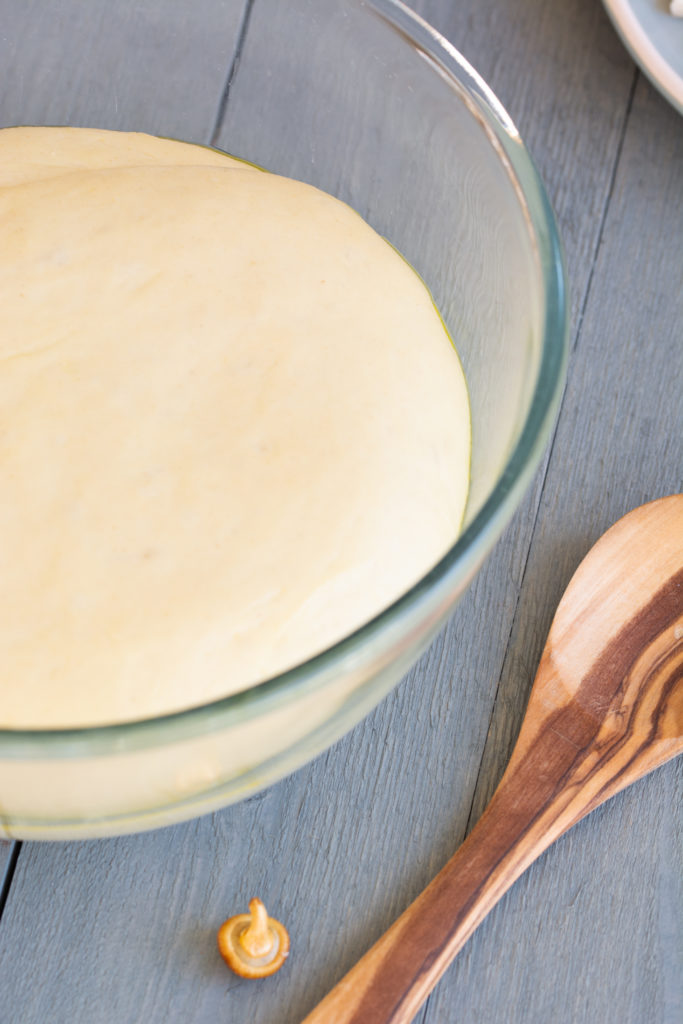 Cut a sheet of baking parchment into 16 little squares and get your steamer ready.

Take out the dough, knock it back and knead for a minute. Divide the dough into 16 pieces and shape each piece into a little ball.

Place a ball of dough in the palm of your hand. Using the base of your other hand, flatten the dough to a circle of about 6 cm wide, keeping the centre a little thicker than the edges. Place 1-2 teaspoons of the filling on the centre of the dough. Try and resist the temptation of adding more, or you may not be able to close the bun properly. Bring two opposing sides of the dough up and pinch them together. Stretch the remaining edges a little and stick them over the closed side. Give a final pinch to seal and shape into a smooth bun. Put the bun, seam-side down, on a piece of baking parchment and place into the steamer. Repeat with the remaining dough and filling. Arrange as many buns in the steamer as will fit without them touching each other, as they will expand quite a bit during the second rise and the steaming. If they won’t all fit in one go, keep the remaining buns covered on a tray until the steamer is emptied for a second batch. Leave to rise for another 20 minutes.

After the second rise, put the steamer either in a wok or onto a pan with a layer of boiling water, making sure the water doesn’t touch the buns directly. Cover the steamer and steam the buns for 15-20 minutes. If needed, top up the water to prevent the pan from running dry. 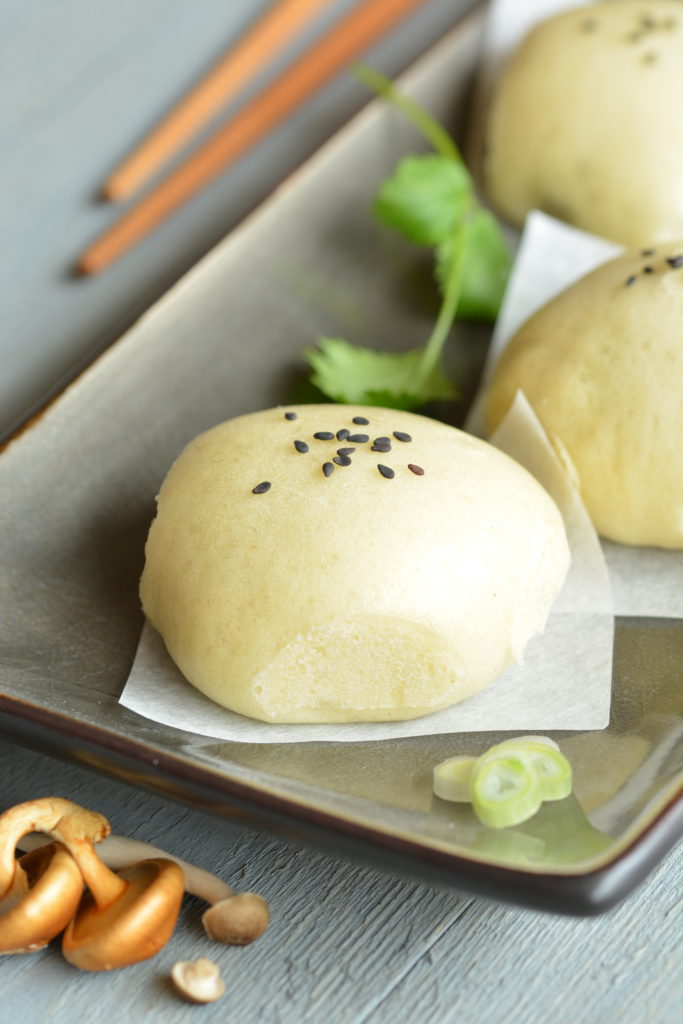 Remove the buns and enjoy them straight away, as they are, or dipped in the extra batch of hoisin marinade.

Any left-over buns can be cooled and kept in the fridge for up to three days. To reheat them, simply cover with microwave film or pierced cling film and microwave on high for 45 seconds, or re-steam them for 2-4 minutes until completely warmed through.

They also freeze well. Put the cooled buns on a tray with the parchment still attached and freeze until solid, then keep in a freezer container for up to 3 months. Before serving, either defrost them in the fridge first or tip them into the steamer directly from the freezer, then steam for 5-10 minutes until completely heated through.