Rendang is a childhood favourite dish of mine. In my home country The Netherlands, Indonesian food is hugely popular, and especially the Dutch-Indonesian rendition of it: the “Indonesian rice table”. It’s the name given to a feast of small dishes: spiced veggies, fried plantain, curried eggs and different meaty stews, accompanied by rice, pickles and toasted coconut – and it always features rendang curry. 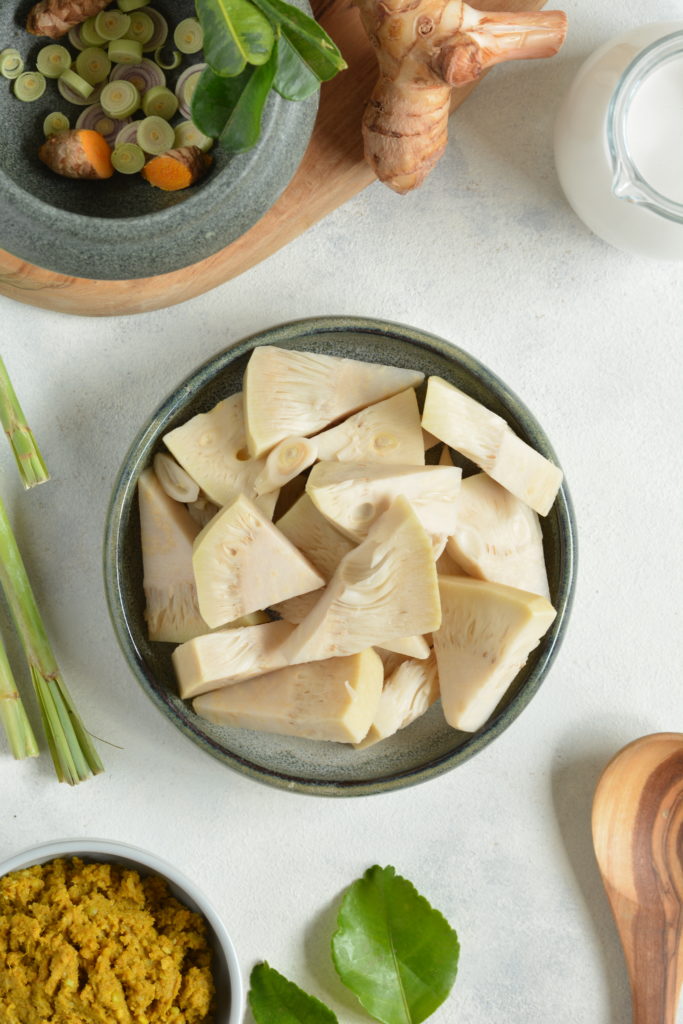 Traditionally a beef stew, the real star of this dish isn’t the meat, but the fragrant sauce used to flavour it: a rich mixture of fresh spices like ginger, turmeric and galangal, with zesty notes from lemongrass and kaffir lime leaves and coconut for comforting sweetness. So when I cook it these days, I replace the beef with young jackfruit pieces and use this sauce to simmer them to full-flavoured perfection. I add in a few dried mushrooms for that extra umami flavour and the result is just finger-licking good. By now, this vegan jackfruit rendang is a firm favourite with my girls, as its meaty counterpart used to be with me. 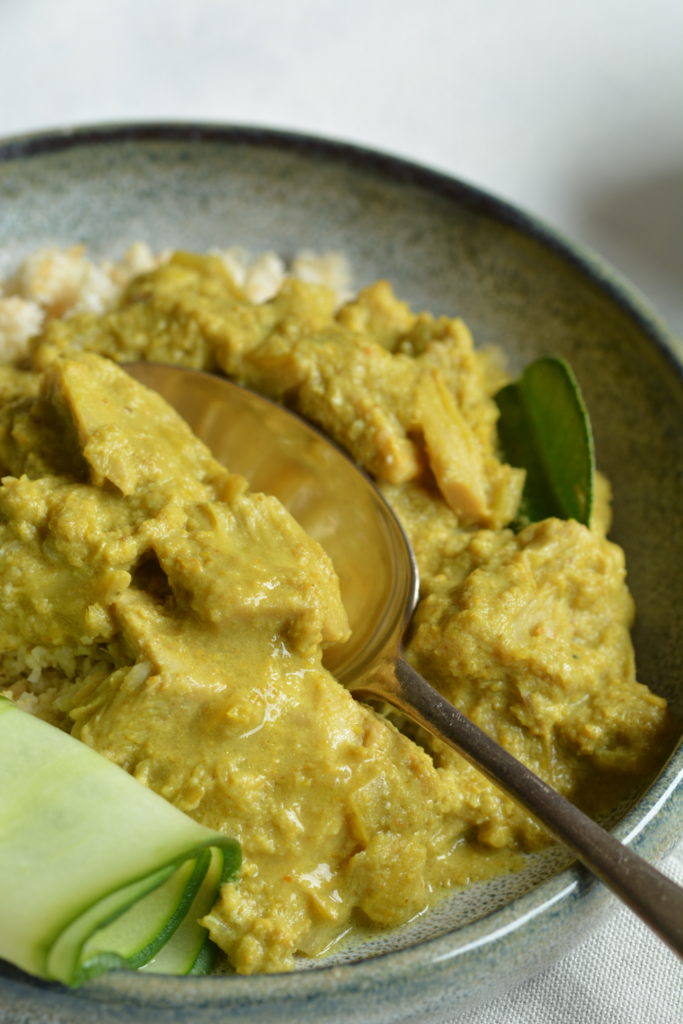 Though I’m generally a true grain lover, I like to serve this jackfruit rendang with toasted cauliflower rice instead of actual rice – to up the veg content of the dish, but also because the flavours go so well together. The recipe for this version of cauli rice isn’t my own; I happened upon it in a Vegan Living magazine feature from Harriet Birrell’s book Whole. In this, the cauliflower is whizzed with cashew nuts and grated coconut, which makes it nutty and slightly sweet. After that, you simply pop it in the oven and cook it until it’s fluffy and just done. It’s not only the nicest and easiest way to prepare cauliflower rice I found so far, but it also seems to be made especially to be paired with rendang. Usually, at the end of the cooking time rendang sauce is thickened and sweetened by stirring in some (or a lot, depending on the recipe you use) grated coconut. In this case, because the accompanying rice is already sweet and coconutty, I leave the sauce as is, which results in a lovely combination of sweet, sour and savoury on your plate. If you prefer, though, you can of course serve the rendang with regular white, brown or black rice instead and add in a few spoons of coconut according to your own taste. 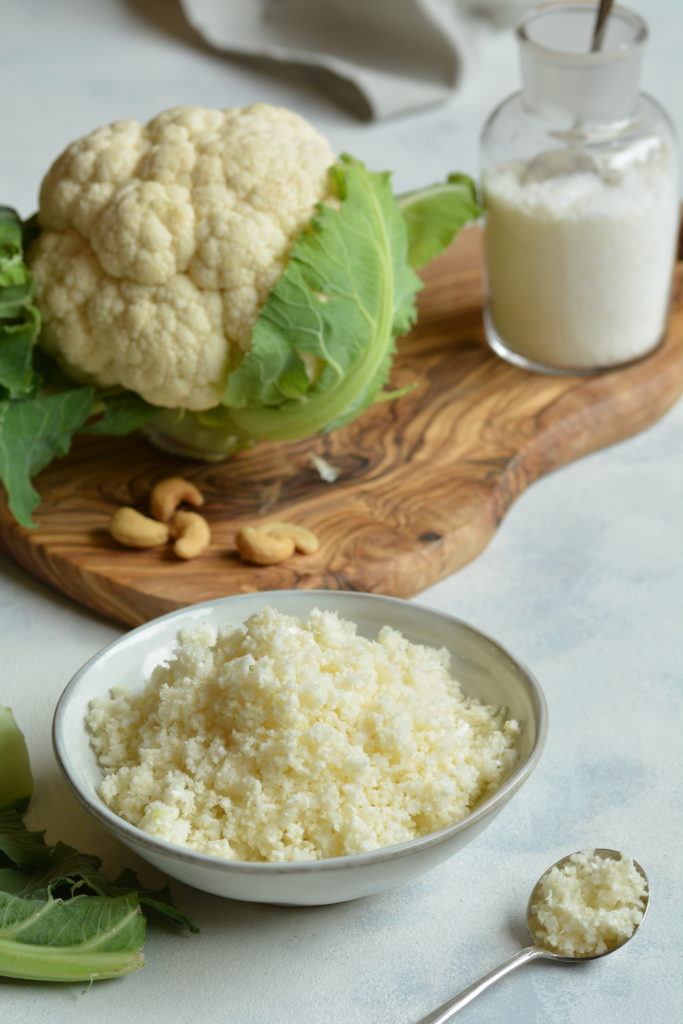 Now spoon on a few strips of quick-pickled cucumber and sprinkle on some extra toasted coconut and your mini rice table is ready.

I hope you’ll love it as much as we do! for the spice paste

for the jackfruit rendang

for the quick-pickled cucumber

for the toasted coconut

for the cauliflower rice First make the spice mix. Using a hand blender or food processor, blend all the spice mix ingredients to a fine paste.

Put the jackfruit pieces into a colander. Rinse them in cold water, then leave to drain.

Heat the oil in a large pan. Fry the onion over a medium heat until soft, then add the spice paste. Stirring well, fry the spices for 1-2 minutes until fragrant. Add the jackruit pieces, the coconut milk, water, kaffir lime leaves and dried mushrooms and bring to a boil. Cover the pan, reduce the heat and leave the rendang to simmer for 1 hour.

Meanwhile, prepare the sweet-and-sour cucumber. Stir the rice vinegar with the agave syrup and the salt. Mix in the cucumber ribbons and leave to pickle.

To make the coconut topping, heat a dry frying pan. Tip in the grated coconut. Shaking the pan regularly to prevent burning, toast the coconut until golden brown. When done, transfer to a bowl and stir in the peanuts. Leave to cool.

Put the cauliflower florets, cashew nuts and grated coconut into the mixing bowl of a food processor and pulse to get a rice-like crumb. Spread the mixture onto two lined baking sheets and place them in the oven. Stir after 10 minutes, then return to the oven to cook for another 10 minutes until the cauli rice is done and lightly toasted at the edges.

At the end of the rendang cooking time, remove the dried mushrooms and the lime leaves from the sauce. Break up the jackfruit pieces with a wooden spoon. Add the lemon juice and soy sauce and simmer uncovered for a few minutes to reduce. Taste and adjust the flavour of the sauce if necessary, with some extra lemon juice, sugar or soy sauce.

Divide the cauliflower rice and rendang over four plates. Scatter with the toasted coconut and serve with the pickled cucumber.